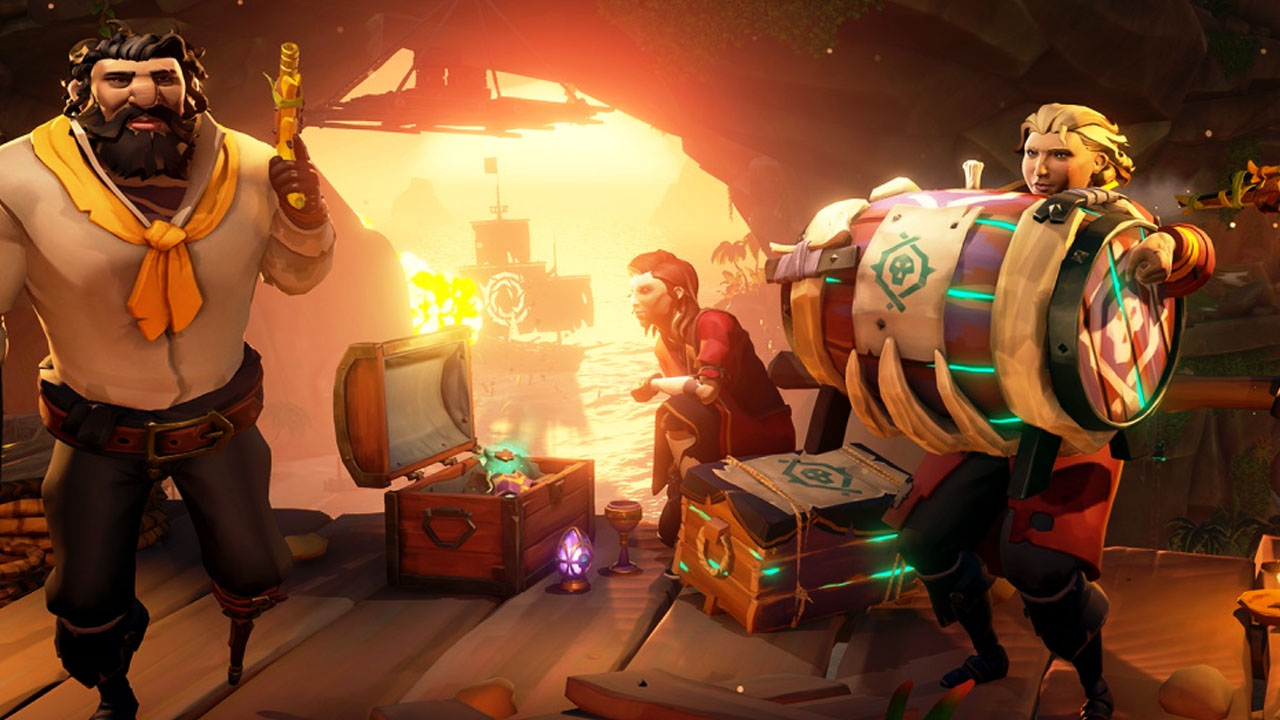 The newest Tall Tale has crews sailing off to stop Captain Flameheart once more with the help of Sir Arthur Pendragon from the Seabound Soul.

Sail to Morrow’s Peak Outpost in Devil’s Roar and start the Tall Tale in The Charred Parrot tavern. The tale will be in front of Tallulah. After voting on the mission, she will tell you about the late Captain Flameheart, who is coming back from the dead to terrorize the Sea of Thieves.

Exit the tavern to meet Grace and Arthur Pendragon. They explain that Grace’s old crewmember, Stitcher Jim, has gone rogue, stole from Pendragon’s Blackwyche, and sealed the crew’s souls into a cursed chest. He intends to use Dark Relics along with the crew’s belongings to resurrect Ashen Lords to strengthen Flameheart’s forces.

Grace helps by giving her journal. The clues point to Jim’s hideout in Liar’s Backbone.

Look for the cave depicted in the journal and pull the lever and enter Jim’s lair.

Inside, the walls have symbols carved into them that include various words. The only three words that are needed are King, Flame, and Heart. Go to the end of the lair, where a puzzle is found. Before heading into the room, grab Jim’s first Journal found to the left in the archway. These are needed to complete the Tale’s commendations.

Put the symbols, King, Flame, and Heart—in that order—on the blocks and pull the lever. The box above will reveal Jim’s Mysterious key and his notes.

Find the Heart of Fire in Devil’s Thirst

The notes reveal that the Heart of Fire is beneath Devil’s Thirst, the next destination.

When approaching the island from the North, the crew will notice a peninsula facing the beach with a chalice on top. If the chalice is lit with a lantern, the path will be illuminated for players entering the Lair for the first time.

Bring the Mysterious key and follow the torches from the North beach and swim downward to find the Heart of Fire’s entrance lit by orange crystals. The key will open up the entrance and will require a lengthy swim through a few underwater caves. The caves only lead one way so players shouldn’t get lost.

After grabbing some air a few times to swim through the caves, a small platforming section involving lava and rocks will mark the halfway point. Afterwards, it’s just more swimming and grabbing air until the main chamber is reached.

Before anything, rummage through the barrels and grab firebombs, which are required to finish the tale. The second Journal is also found in front of the middle door, to the right.

In this room, players will have to choose a door, find a symbol corresponding to the door, and throw a bomb at it.

Note that in order to complete the tale 100%, each door must be opened in three separate playthroughs, and there is a Journal in each of the doors.

Path of the Eternal King

The leftmost door leads to the Path of the Eternal King. To open it, throw the firebomb at the symbol above the lava waterfall to the left.

The first room leads to a hallway filled with fire traps. Crews should get their timing right and jump in-between the fire bursts. Pirates should also bring a water bucket in case they get caught in the flames.

The end of the hallway will have a pulley to open the door.

Next is a room filled with Ashen skeletons. To deal with these undead, lead them to the middle of the room and throw a firebomb at the skull statue. This will activate a spike trap, taking care of Ashen instantly!

The next two rooms involve more fire traps, which are easy enough to overcome. After running through the burning doors and over the spinning fire trap, there will be a room filled with lava and rocks on which to jump. Near the end of the path is a rock with a Journal.

After swimming through underwater spikes, another Ashen skeleton room will be found with another trap in the middle. Throw a firebomb at the skull statue and watch the Ashen burn.

The corridor afterwards will be filled with more fire traps, along with swinging spiked logs. Jump over the fire and dash through the logs.

Adventurers will then jump on the sides of the next room to avoid more spouting flames.

The final room involves using a pulley to lift rocks from a lava pool to use as stepping stones. Letting go of the pulley will sink the rocks, so act quickly! If all goes well, everyone will end up on the other side of the three paths.

Path of the Forsaken Flame

The stone door in the middle of the chamber leads to the Path of the Forsaken Flame. It will open after lobbing a bomb at the skull with the corresponding symbol to the left.

The first obstacle is simple, as they’re timed fire traps. The second one is trickier; it involves throwing another bomb at the flaming skull to the left above the lava. Jump over the lava and throw the explosive at the skull. This is timed, so adventurers need to be fast to reach the door.

Players will encounter a room filled with more Ashen skeletons. Throw a bomb at the skull to activate a log trap to kill them all. The log will roll back and forth for a bit; move out of the way.

The area afterwards has another Journal in it near the red candles and skulls.

Spinning wheels of fire await in the next room and afterwards is the spike room. The room starts with timed jumps across floors with sharpened logs jabbing upwards. This will lead to a pulley, mast, geysers, and a gate.

The team will have to coordinate lowering the mast using the pulley to run across. Taking too much time will lead to the mast pushing the player to the spikes on the ceiling. Additionally, the geysers will toss players to the spikes as well. Run over the mast and jump into the water.

The next room involves a puzzle with skeletons in cages. A cage holding a skeleton with a lit torch can be lifted up via the pulley from the room’s entrance to light up a skull. The second cage is at the end of the path with an unlit torch. Use a lantern to light it up and use the pulley here to lift him, opening the exit. Additionally, players can use firebombs to light up the skulls.

The last room has players finding two levers to reach the path’s exit. Pirates must use the capstan in the room to open up a door to the left while dodging the fire surrounding it. A hidden door will open, leading to a lever, which will not only open the exit but set off swinging blades to dodge. A door at the end will mark the end of the Eternal King’s Path.

Path of the Burning Heart

To open up the right path, throw a firebomb at the corresponding skull hiding behind a waterfall to the right.

The room has two spinning blades cutting across it, along with a broken bridge. Two stone skulls hidden in the room need to be lit with bombs to leave. The first skull is on the bridge before passing the blades to the top left of the door. After slipping past the blades, turn around and find the second skull. They both need to be lit quickly before they run out of fire or else the player will have to light both skulls again.

The next room will have a simple spinning fire trap to go through, leading to a pool of water. The cavern can’t be exited until the four blades at the end stop spinning. Four levers are needed to stop them and they’re all hidden. To the right of the blades is the first lever. The second is back at the water’s edge to the wall on the right. Jump into the pool and look for a glowing crystal that is lighting up the third lever. Swim past that to find an alcove with a barrel and a lever to the left. This will open up the cavern.

Another spinning wheel puzzle is in the next room and will require some jumping. Once that’s cleared, the crew will find a big room with lava, two cliffs, and a swinging axe. Brave warriors need to time their jumps or sword lunges to get past the axe while grabbing the ladder at the end.

This will lead to a room where the crew has to fight Ashen skeletons. To make the fight easier, look to the left from the entrance to see a skull that can be activated with a bomb. Flames will shoot across the room, killing many of the skeletons.

After fighting the wave of enemies, the next part of the path will have a player holding a pulley to open a door while the others run through the trap-filled room. Luckily on the right, there’s a ramp that can be taken to avoid half the traps while jumping over the lava to the doorway. Jump into the water pool and go into the final challenge.

The corridor has spikes protruding from the sides of the walls and only two safe alcoves along the way. Right after the first spikes retract, run down the hall and hide in the alcove to the right between two wood beams. Use the same tactic to get past the second set of spikes to reach the second alcove with a Journal. The final exit is at hand.

Upon entering the chamber, players will see the ghost of Flameheart’s ship and Stitcher Jim wailing in front of a cursed chest. After the scene ends and Jim runs off, grab his chest and attempt to follow him.

A door will be blocking the path, requiring firebombs or the chest of rage to power it up. Insert the chest, shoot it a few times to have the chest explode, and the door will open. Grab the chest and continue toward the exit. Along the way fire traps can be found, skeletons need to be fought, and doors need to be opened with firebombs. Keep following the path while dodging the traps. Jump over the final waterfall at the end, swim out, and exit Flameheart’s Lair.

If players are able to take all of the paths and retrieve all of Jim’s Journals, they will receive the Ashen Hull and the Ashen Curse, which will give players a flame cosmetic.

That’s everything pirates need to know about the Heart of Fire Tall Tale, stay tuned for the next Sea of Thieves Tall Tale guide.