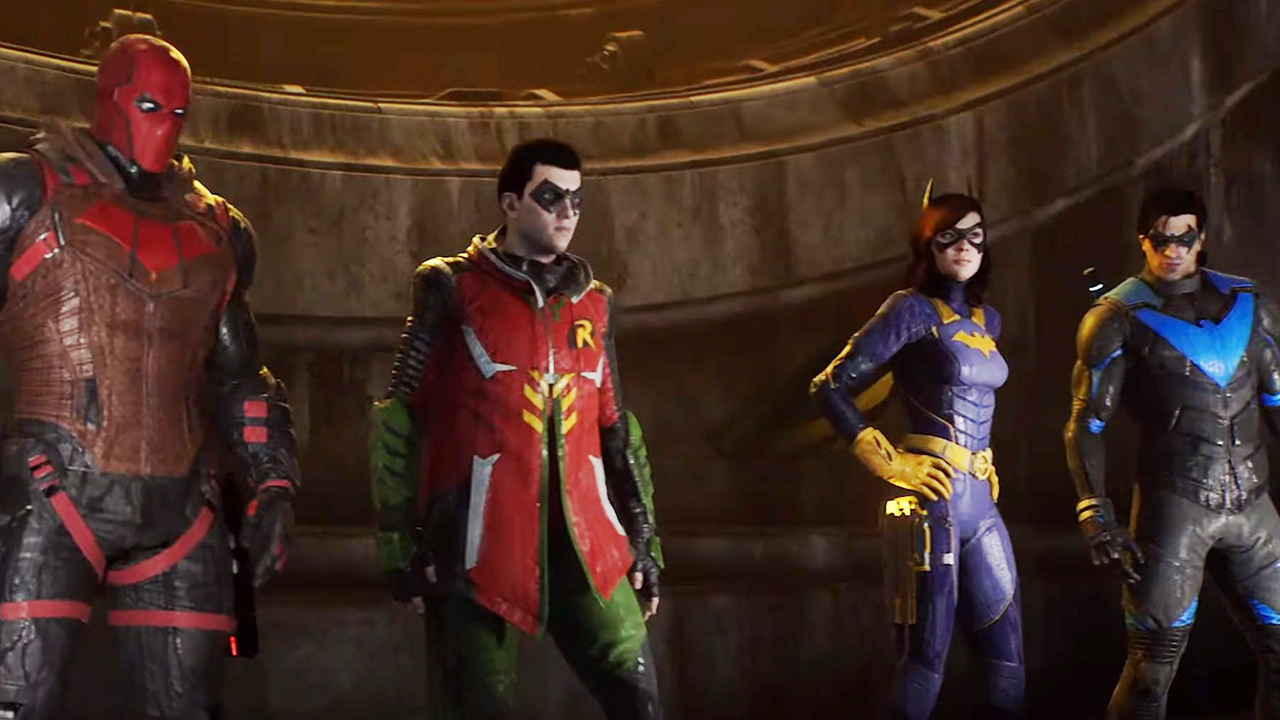 WB Games Montréal revealed Gotham Knights to the world at the recent DC FanDome event. The game’s premise would fit well as a continuation to Rocksteady’s Arkham Knight, however, WB Games stated Gotham Knights takes place in its own universe, with no connections to the Arkham series. The cinematic trailer introduced four playable characters—Batgirl, Robin, Nightwing, and Red Hood—who unite to solve their biggest mystery yet, Batman’s death. Gotham Knights will be released for all platforms as cross-gen, including PC, in 2021.

The CGI trailer starts with newscasters reporting a recent explosion in Gotham. There’s mentions of a collapsed building and a body found beneath the rubble. A reporter is heard saying “We are now able to confirm that billionaire philanthropist Bruce Wayne is…” but is cut off by static before finishing his sentence.

A change of scene to a dark and rain-drenched alley reveals one of the playable characters, Jason Todd (Red Hood), receiving an encrypted transmission on his phone. The “code black” is a video from Bruce, and the first thing he says is “if you’re watching this, I’m dead.” Having also sent the message to Barbara Gorden (Batgirl), Dick Grayson (Nightwing), and Tim Drake (Robin), Bruce goes on to explain it was automatically triggered when he destroyed the Batcave.

He states that Gotham’s criminals will learn of his death soon, and that the GCPD hasn’t been reliable since Detective Gordon died. More than ever, the city will need protectors to defend against the coming storm, and he’s leaving the four of them the Belfry as a base of operations. He turns the camera off after offering his final words, “good luck…and goodbye.”

It’s an exciting take on the Batman universe, since most Batman games involve…well, Batman. Not this one though, Bruce Wayne is truly dead and gone; unless it’s a ploy to shoehorn a twist ending and reveal he was alive the whole time. Hopefully that’s not the case, as Bruce’s death lends weight and importance to these four interesting characters who deserve some of the spotlight.

The trailer ends with a massive tease of the game’s main villain, or in this case, villains. It seems the Court of Owls had something to do with Batman’s demise. This time the mystery won’t be solved by one, but four, caped crusaders. However, Red Hood’s trigger seems happy in the video, and he’s likely not in the mood for mercy. It’ll be interesting to see the dynamic he shares with the rest of the Batfamily.

It’s safe to say each Knight will play differently. Batgirl combines tonfas with kickboxing, capoeira, and jiu-jitsu while Nightwing has mastery of acrobatics and wields Escrima sticks. Red Hood has peak strength as well as proficiency with all manner of weapons. He prefers guns but it’s uncertain if he’ll be forced to use rubber bullets for this one. Robin’s collapsible quarterstaff and knowledge of behavioral science and psychological warfare give him various advantages in the field. He can even use satellites to teleport himself.

The gameplay resembles that of Rocksteady’s Arkham series in many aspects, which isn’t bad. Batgirl is shown grappling onto and launching from gargoyle statues, as well as gliding above the city using her cape. Familiar moves like the stealth takedown make an appearance but she also performs some new ones, such as wall-running onto a van and jumping off to connect a mid-air punch. Barbara’s agility exceeds Batman’s and it shows in her movement.

The other three characters weren’t included in the gameplay video other than a co-op partner joining in as Robin—only a stealth takedown from that player’s viewpoint was shown. Yes, there is co-op, but only two-player, which is odd since there are four customizable characters. Batgirl can be seen setting an enemy up for a tag-team attack with Robin, meaning there is combat interaction between the two players as well, leading to creative ways of utilizing teamwork to dispatch opponents.

This batty family gathering looks like a fun experience, even if the lack of four-player co-op is disappointing. It’s possible the game was too difficult to balance for four players, or maybe it’s coming in a post-launch update…though, that’s extremely unlikely. Still, even the thought of just two players is appealing.

Also of note is the progression system; it is a fully-fledged RPG with gear, skill-trees, and leveling. Bosses will even use different movesets and tactics the higher a player’s level. Trying out different builds and talents while synergizing them with a friend’s for maximum damage will be incredibly entertaining. WB Games has yet to mention if Gotham Knights will be a live service game or a co-op game with post launch support.

Gotham Knights is nested in a cozy position. Though it’s WB Games’ first Batman project, it benefits from the Arkham series’ legacy. For many fans, Gotham Knights will be their next “Arkham” installment, even if it has nothing to do with the Arkham IP. That’s because Rocksteady’s game was iconic, and inspired others to borrow from its well-implemented features. Gotham Knights, being set in a post-Batman universe and using Rocksteady’s gameplay formula, will be irresistible to the Arkham fanbase.