Discussion: Do We Need Bioshock 4?

It’s been five years since the last Bioshock title was out into the hands of gamers all across the world. Since then there has been only whispers and rumors about the next Bioshock title. Recently rumors have suggested that a new Bioshock game is currently being developed by a secret studio at 2K. With this new rumor we’d like to take a look back at previous Bioshock games and answer the question that’s been rolling around in our heads for awhile. Do we need another Bioshock game?

On August 21st, 2007 the world was greeted with what would become one of the best reviewed games of all time. The original Bioshock brought a different kind of experience to the Xbox 360. A thrilling game with a constant harrowing effect on players. The design of Rapture was something to behold. A underwater city that looked almost like a utopia from the outside. What lied within was something no one ever expected. Bioshock greets you with distress right off the bat. A calm start turns into a scene of peril. Crashing into the ocean players are only given a taste of what’s to come. As you survive the wreckage players swim to this lonely lighthouse that almost seems to call to them.

Stepping inside players enter some kind of submarine. As the latch closes they descend down into the depths towards Rapture. The submarine moves slowly around the city allowing players to take in these sights. As the submarine docks and a scene plays out between two splicers. One brutally murdered by the other. Players can only look on as blood and echos of a dying man fill the room. Just when you think it’s over you hear those words, “is it someone new?”. The victorious splicer then sets his sights on you and tries to break into the submarine. Players sit defenseless unable to do anything they can only listen as they hear metal and wires being ripped away from their safe space after awhile the splicer gives up and leaps away. From this point on the player realizes, this isn’t a Utopia, this is a nightmare.

Bioshock original set the stage for thrilling shooters on the Xbox 360. With Bioshock 2’s release 3 years later the series kept the same formula that made the original so great. Constant action, plenty to do and a grasping story. These games were innovative for their time and it’s not hard to see why they were praised so highly. Although what was to come after would be something no one really knows how to feel about. Bioshock Infinite is a game no one really has a definitive answer for in regards to how they like it. The community is divided on whether it is actually a Bioshock game because it doesn’t follow the same theme and formula as the first two titles. Bioshock Infinite took more of an action and scenic approach rather than the thrilling and dark approach of the first two titles.

Bioshock Infinite is in no way a bad game, it delivers a intense action experience around every corner and has some light-hearted moments. The story on the other hand is confusing and doesn’t really end that well. Characters were more or less forgettable except for the three main characters Booker, Elizabeth and Father Comstock. Bioshock Infinite tried to bring the same delivery of scenery that the first two titles had going for them. Setting a game in an awe inspiring location inspires players to explore and take in the scenery. Pair this with side quests and objective and you’ve got yourself a game that keeps on giving, something all titles could use a little more of.

What Bioshock 1 & 2 had that really set them apart was the thrilling nature of gameplay. To peek around every corner and wonder if your going to make it out alive was a constant factor. To know that no one is coming to help you and that your on your own. What Bioshock Infinite had going for it was the intense action and light-hearted feeling story. Not to mention a floating city in the sky. Now if one were to bring the best qualities of these games together, we would have a game that delivers on all levels.

Now to answer the question, do we need Bioshock 4? The answer is a definite yes, but just like Santa Monica’s new God of War it needs to take a different approach. It needs to be a combination of both versions of Bioshock. The thrilling nature of the original two, but with the intense nature of Infinite rolled into combat. With a gripping story that doesn’t fail to deliver interesting characters and surprise the player at every turn. The setting would have to follow the same formula as all three titles. Taking players to a place that they would never see in the real world.

Combat mechanics could remain the same as they are simple and intuitive. Bioshock 4 could even switch up it’s gameplay from 1st to 3rd person. While this most likely wouldn’t sit well with the fans, it would make for a more thrilling experience if 2K decided to take a more horror themed approach. It also wouldn’t be bad to see yourself in a Big Daddy outfit drilling through splicers in 3rd person.

With worlds as large as Rapture and Columbia, it’s amazing that 2K and Irrational Games didn’t feature full length side quests. Exploring the city and learning more about those who dwell within was a definite missed opportunity. If we are ever delivered a 4th installment we hope that it features more side content rather than more stories through individual DLC’s. Bioshock 4 may be far off on the horizon, but at this point we can only speculate and hope for what is to come. With this being the 4th title in the series, it has an almost imperative need to outdo its predecessors, especially with the some of the survival and action games of today.

Let us know what you think below, do you agree? What would you like to see in a new Bioshock  game? Would you prefer a completely different approach to the series or something similar to previous titles? Leave a comment below. Don’t forget to check out our video on this topic above. 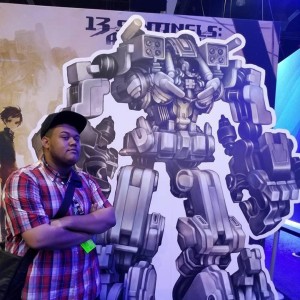 From the debts of college rises a man who vows to finish the 24 unfinished games he has on steam. Even if it cuts into the time to finish the 25 Netflix series he still hasn't finished.