Death Stranding 2, or DS2, was announced by Hideo Kojima during the game awards, so we’ll be running like Princess Beach and Mario in no time. There were hints of what’s to come in the four-minute trailer, including squids inside BB pods and Troy Baker singing while a masked figure played guitar. It was more than enough to get me excited and thinking about the future of the franchise. Here are eight things I want from the sequel.

Naming the game DS2 is strikingly simple for Kojima. During the announcement, they did discuss the title as DS2 without saying the full name, which is weird because no one referred to the first game as DS. Furthermore, Kojima Productions tweeted that DS2 is a working title, meaning the naming convention may not be as obvious as it seems. I suspect the real title will specifically reference the game’s plot, orienting it away from the apocalyptic “Death Stranding” event. Putting a “2” behind a title is a conventional naming scheme, and something with more flare is fitting for a game as wacky as Death Stranding.

Now that Kojima Productions got to test the PlayStation 5 with the director’s cut, it’s fully prepared to make a PlayStation 5 exclusive title that utilizes everything the console has to offer. Hopefully, by the time of release, the transition period between consoles will be over and there won’t be a need to bog down development with a PlayStation 4 version. On top of the graphical and performance capabilities, Kojima could use the DualSense controller to simulate footsteps through the sand or the tension of pulling a trigger. Overall, I hope the game will be one of the best looking on the console from the vast landscapes to the realistic character models.

We played as Sam Porter in the original game, and he was a decent character, but we’d love to control someone else in the Death Stranding world. As she was heavily featured in the trailer, Fragile, who helped Sam in the first game, seems like an obvious contender. We see her playing with a baby in a bunker when a sudden alarm sends her into a frantic state of survival. An unknown enemy chases her out of the bunker, where she is hit in the shoulder by a bullet and passes out. In fact, she shares more screen time than our presumed protagonist, Sam. I want to play as Fragile for either part of the game or the whole game, utilizing her teleportation ability in combat and during deliveries. 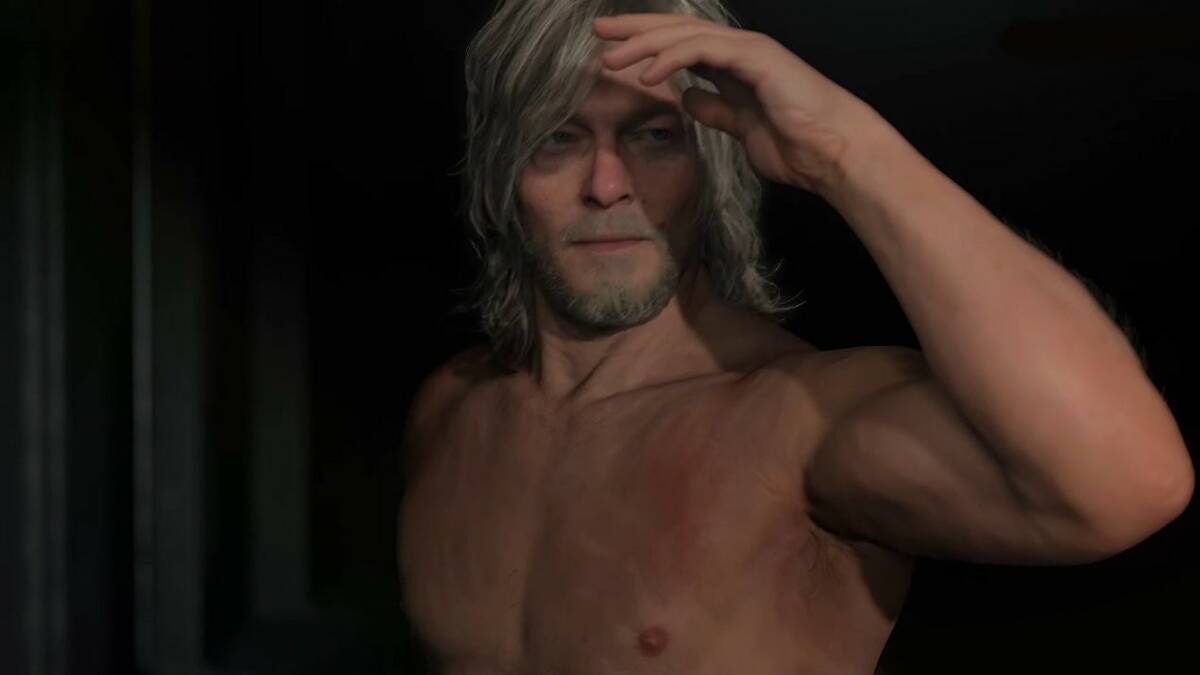 The first game had Sam trudging through Ireland-inspired terrain and snowy mountain tops. It was picturesque, but I’m ready for a novel environment to capture my imagination and inspire a strange state of relaxation. The trailer showed a sandy environment, which would be a welcome detour from the rocky lands of DS1. Instead of crossing rivers, you could find a way to cross quicksand. Furthermore, there were floating structures and a metallic tower, signifying a more sci-fi look to the environment. I look forward to seeing where Sam and/or Fragile end up next and how it will change gameplay.

When it comes to gameplay, Death Stranding is mostly about being a delivery man. In the original game, Sam could ride motorcycles and trucks to make his travels faster. He could also put crates on a hoverboard to ease the weight of the cargo. Additionally, in the director’s cut, he could load the cargo into a catapult and launch it across the map. In addition to these, I would like to see more transportation options, such as air travel. I’m sure that whatever Kojima comes up with will be better than anything I could think of.

Along with the Beached Things (BT’s), Sam had to fight greedy humans who tried to steal his cargo. In these sections, combat was clunky, and lacked depth. It would be nice if combat was revamped for DS2 to include enhanced weapons, varying enemy types, smoother gameplay, and upgraded stealth. Furthermore, indoor environments and complex horizontal terrain would be more exciting than fighting on flat land.

I want to do something more impactful than a pizza delivery. The standard deliveries from the first game were mostly used to raise your star rating, but they didn’t have insightful commentary or significantly altered gameplay. In DS2, I would like to see more side quests with emotional depth for those sending you on the delivery, such as a standalone storyline that explores the complexities of surviving in the world. I’m talking about side quests that will surprise you with their significance or presentation. Maybe something besides standard delivery that alters the gameplay loop.

The best part of Death Stranding was the light multiplayer mechanics. The act of building roads or a zipline network with the help of other players created a positive multiplayer environment that amplified the theme of connection. I could see multiplayer taking a more active role in the sequel. Players could invade your game to help you across the terrain in addition to leaving supplies behind, or they could help out in combat encounters. My ideas are basic, but I’m confident Kojima will think of a creative and innovative multiplayer implementation that corresponds with the theme of DS2.