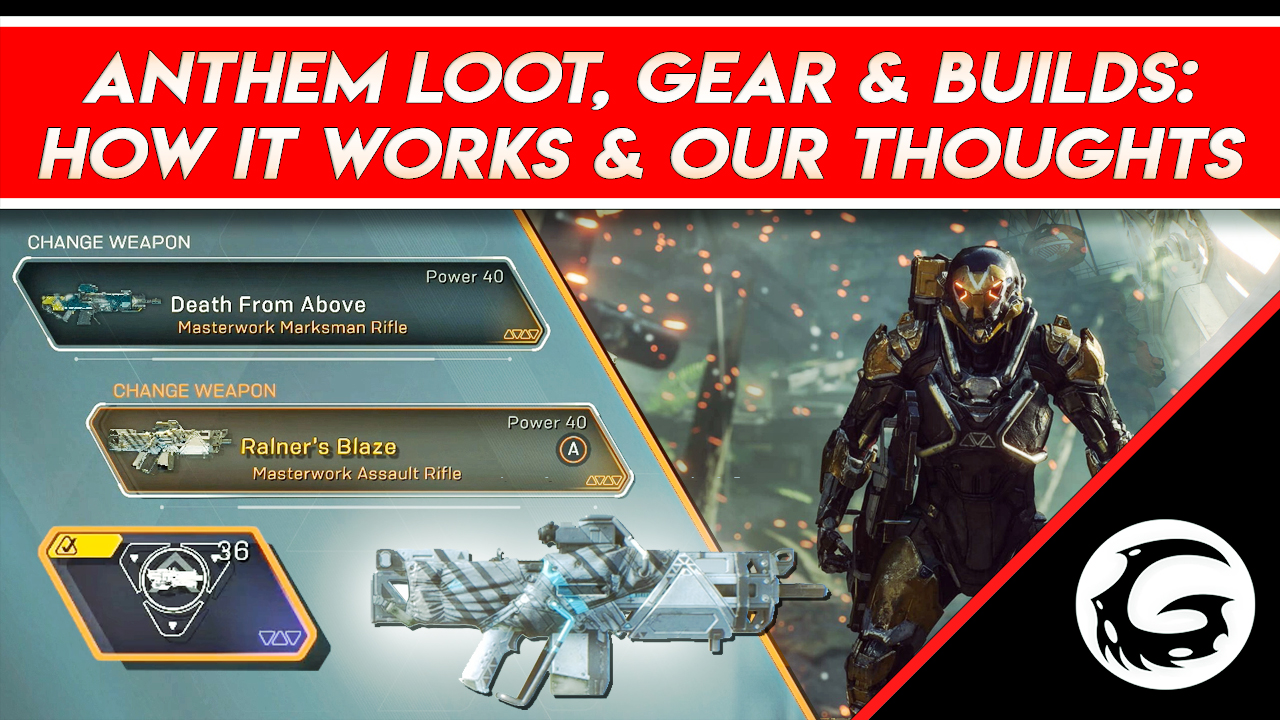 Just last night, we got an epic treat from the devs of Anthem, as Ben and Darrin (both producers on Anthem) set out to show us exactly what we’ll spend the majority of our time focused on in the game. If you haven’t guessed already what that system is going to be, it’s Loot. Today, we’ll be diving into those systems and what you can expect when gearing up your Javelin suits in Anthem.

Firstly, Anthem will run with a rarity system not unfamiliar to players of similar loot-based games, with a lot of allusions to games like Diablo, the Division, and Destiny 2. Unlike those games, however, there are a few further systems that are relevant to how Javelins actually work within the game that will dramatically change how you think about creating and developing builds. We’ll get onto those shortly.

The rarities of gear are as follows: Common, Uncommon, Rare, Epic, Masterwork, Legendary. Sound familiar? That’s right. If you’ve ever played a game with loot, these categories will be immediately obvious. I think that’s actually great – it’s a tried-and-tested system that simply works. No messing around with fancy names or anything, we want to actually get stuck in with loot, instead of getting bogged down with categorizing individual pieces. The art of building a javelin is in combining those pieces together, anyway.

Now, each gear piece scales with both rarity and level. So, a level 10 Common Assault Rifle is similar to a level 20 Rare Assault Rifle, but the latter will do more damage. The level will be based around the player’s pilot level, which is raised independently of which Javelin the player is using. No max level has been confirmed, but there was a suggestion, by Darrin in the stream, that hitting level 30 will allow players to access the higher rarities much easier. So it seems likely that could be the max level (at least until further expansions, maybe). One example item might be a level 20 Rare assault rifle, with a certain power level that contributes to your Javelins overall gear level. For those not keeping track, that means we have three things to be paying attention to here: Rarity, Player level, and Javelin Gear Level. As your Javelin’s power level increases, so too will its own rarity, which rises parallel to your own ‘gear score’, very similar to how Destiny’s own ‘Light Levels’ work. 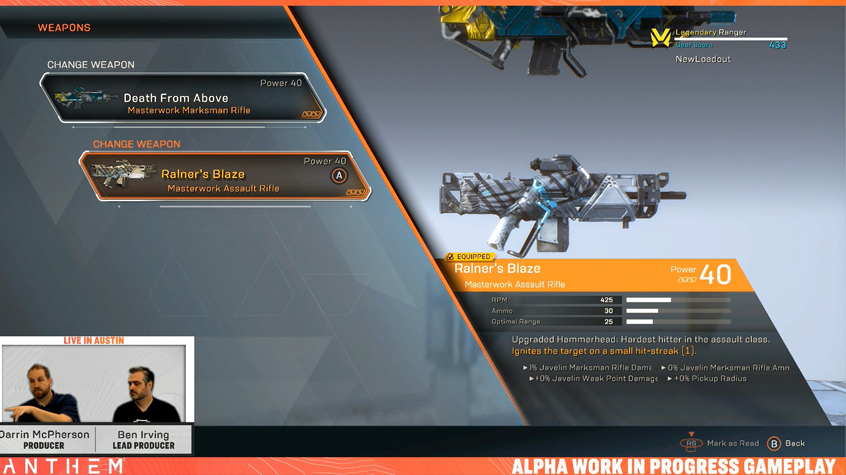 Each gear piece can also drop with ‘Inscriptions’, with higher rarities up to Rare having up to four separate Inscriptions. These are small buffs from an enormous pool of over one hundred different potential perks that can supplement everything from your flight time, ability to hover, cooldowns, elemental damage, you name it. These are absolutely going to be crucial to building a Javelin with a cohesive design philosophy. So, a player who stacks movement speed and melee damage Inscriptions on their gear could create a ‘Bruiser’ build, while one of their friends could be focusing on increasing their raw output through ability synergies, and another on cooldowns to ensure support abilities and ultimates are always available.

The gear shown on stream is an example of the ability-focused build, where missile kills boost the damage of the grenade being used. Then these grenade multi-kills boost their damage further. This combines with the Javelin’s Inscriptions affinity with hovering, perks that reduce cooldowns while hovering, and increased hover duration. These buffs stacks create a kind of ‘build momentum’ akin to what we see in high-level Diablo builds; stacking appropriate modifiers can make for some incredibly powerful combinations. The devs noted that there will be some element of building necessary, in order to compete with Anthem’s higher difficulties.

Now, that’s actually a really good sign because it says to me that I won’t be able to complete, or even take part in, all the content on day one. In other words, I have ‘aspirational content’ that I can constantly work towards. For example, I might have heard that killing that Ash Titan on the highest difficulty drops some epic loot, so my squad mates and I might work together, creating builds that synergize in order to take this Titan down when we eventually get powerful enough.

I absolutely love that kind of theory-crafting, and I know a huge number of other players do too. The extra good part is knowing that the regular difficulties, stories, and the enormous open world are there for people who don’t have enough time, or simply aren’t interested in going that deep in Anthem, and that’s fine too. Just as long as everyone is catered for. And it’s looking like they certainly are.

Now I mentioned ‘combos’ there, and I should stop for a moment to explain. There are devastating combination attacks that you can perform in Anthem, either solo or with friends. No, sadly I don’t mean combining your Javelins into one super-mech and taking that Ash Titan on in a Godzilla style brawl. What I actually mean is that most gear can come with an elemental property, and that these elements can combine together to create some awesome ‘combos’. We’ve already seen the Colossus’s mortar being used on frozen targets to shatter them, and there will be tons of other interactions for players to discover and build towards.

Once you get to Masterwork and Legendary weapons, however, things start to get really interesting. These weapon will have their own ‘Orange Text’, which are powerful, unique abilities that provide something to really build around. Now, this reminds me a lot of Diablo’s legendary item system, and that’s a really good thing, because those moments where a new legendary item drops and you get to crack it open, discovering what it can do, are really exciting. Maybe your assault rifle sets targets on fire every ten shots, like the one the devs were using, or perhaps your shield absorbs enemy fire to boost your team’s damage. 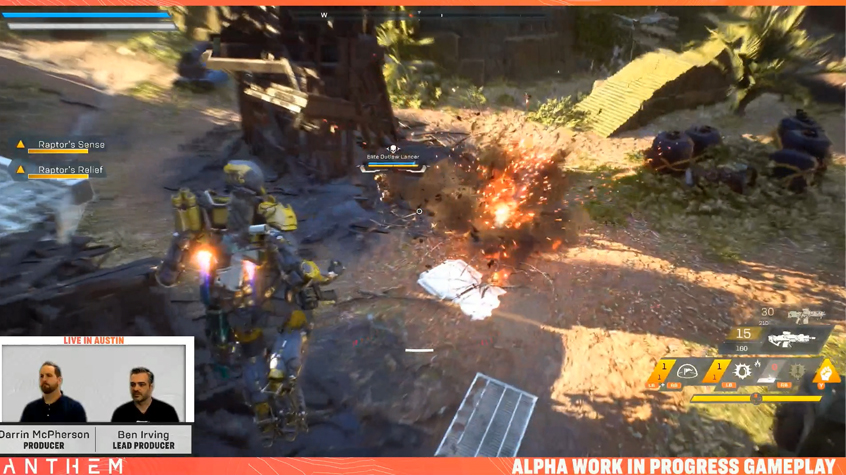 This is all to be combined with the previously mentioned abilities, item Inscriptions, and elemental damage to create a truly unique, powerful build that is both individual to each player and combinable with other players’ builds. There is some huge breadth for customization here, and it’s all available through gameplay – again, no power can be purchased in the game, all of it either needs to be found, earned through quests, or crafted.

All that, and I haven’t even mentioned crafting yet! We actually don’t know much about the crafting system. We know that blueprints can drop just like loot, and that players can craft their own items of all rarities by collecting the resources out in the world of Anthem and combining them with the blueprints. The item created will have a random set of properties, just like an item dropped by killing an enemy. Players may need to craft items multiple times, in order to get the right inscriptions or elements for their builds. Items will be crafted at the player’s current level, and they seem to be intended as a supplement for items found out in the world. Don’t forget that items can’t be traded or sold, so this is all just for your own creative self and working towards fitting in that last part of your Javelin masterpiece.

So, that was pretty much it for the livestream. We got to see some awesome gameplay too – though unfortunately some of it was bugged, but Ben said they were working on it or have already eliminated most of them. We are starting to see how clever item combinations and build choices could lead to some really powerful Javelins at Anthem’s endgame. I know that I’m really excited to see what the community comes up with. Creating new, unique, and (of course) fun builds is always a great way to see the community come together, share ideas, and even compete to see who can do the most damage or complete a trial the fastest.

As for endgame, it looks to be increasingly likely that it might not be completely fleshed out when the game launches. I think we’re almost certainly going to see some DLC announced as or after the game launches, and we’ve been stung a lot in that regard this year with some unsavory game releases. But if Anthem sticks to its ‘free story expansions’ and ‘no purchase-able power’, then I don’t think it’s that unreasonable to expect us to pay for cosmetics. For now, we’ll have to bide our time, and get excited about what we know. If Anthem turns out to be as deep, interesting, and structurally sound as it looks so far, we’ll be in for a treat come the live demos at the start of next year, and onward to game launch.

The Division 2 is a Game Changer: Here's Why | Gaming Instincts TV

[…] and locations at absolutely no cost whatsoever. It sounds like they’re taking the same route as Anthem’s developers, who are only going to charge for […]

Everything You Need to Know About Anthem's Ranger | Gaming Instincts TV