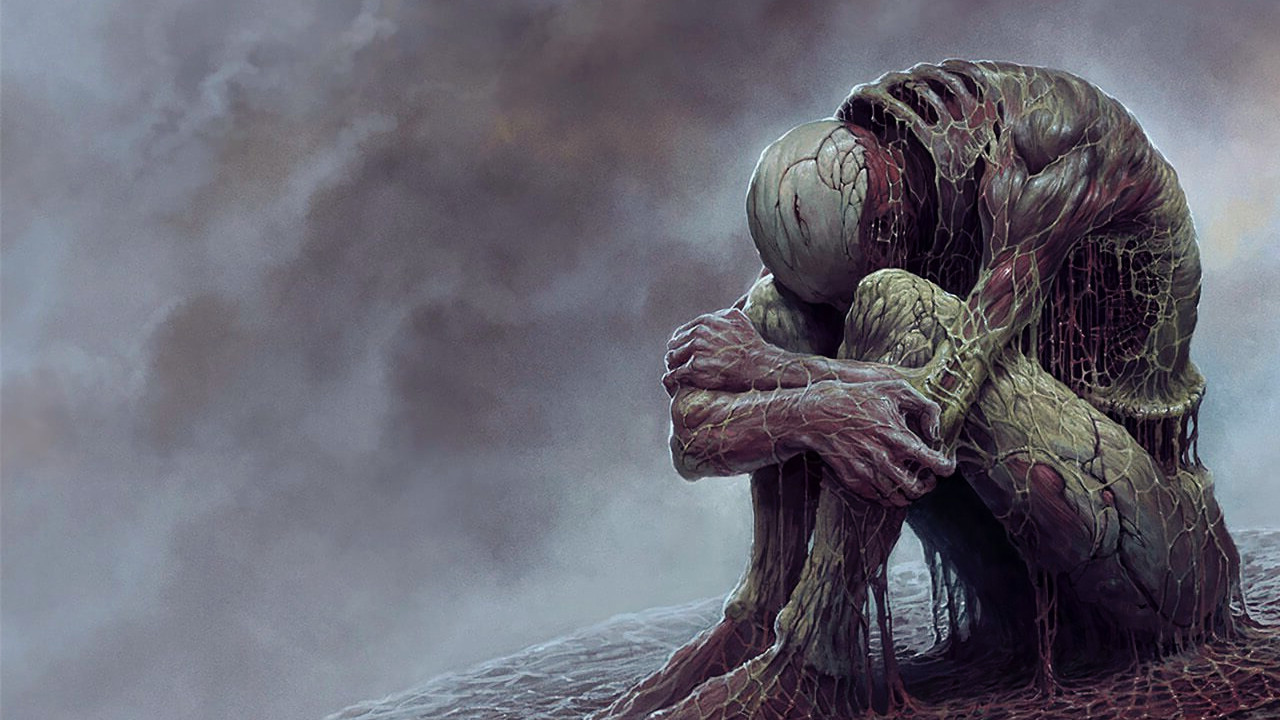 Scorn, an atmospheric FPS horror adventure game developed by Ebb Software, reemerged during Xbox’s recent First Look after a long and silent hiatus. The trailer was a literal first look for viewers, except those following the project since its 2014 inception. Now exclusive for Xbox Series X, Ebb states the game will arrive during the console’s launch period, although an early 2021 release is possible. A PC version has been confirmed for Steam and Windows Store. There’s been no answer in regards to a PS5 version.

Inspired by works from artists such as H.R. Giger and Zdzisław Beksiński, Scorn’s nightmarish hellscape immerses players in its puzzles and gunplay. Originally a two part series funded by Kickstarter and investors, Ebb now has the proper backing to deliver the experience they’ve always envisioned. They’ve refused to work on current-gen versions to preserve the quality of story, setting, and gameplay possible only through the Series X’s powerful hardware. The game will run on 4k at 60 FPS.

Scorn’s artistic inspiration oozes through the fleshy pores of its techno-organic underworld. Set in “a nightmarish universe of odd forms and somber tapestry,” the trailer shows an unsettling environment—which, according to devs, is “a character itself.” Within the claustrophobic realm reside misshapen organic lifeforms with their own warped personalities. Metallic structures blend with meaty surfaces to inspire a hellish and unwelcoming atmosphere. The macabre inspiration of H.R. Giger (artist and designer of Alien) is duly noted, as is Beksiński’s gothic dystopia.

Blank Storytelling in a Cohesive World

Since its original announcement, Scorn’s developers have promised a cohesive “lived-in” world. Designed to create the feeling of awakening in a dream-like realm, the game won’t feature cutscenes, opting instead for “blank” in-game storytelling to progress the plot organically. Ebb Software doesn’t want to distract players while they explore the living, breathing atmosphere they’ve created. The environment itself is a character attempting to unbalance and unsettle. No information has been revealed in regards to the story’s plot.

Isolated and lost, players explore a map consisting of interconnected maze-like regions brimming with rooms and paths to discover. Every area has a unique theme and story, with puzzles to solve and characters to interact with, all coming together to form a “cohesive” world. Venturing deeper into this fleshy dreamland will open up new areas and insights, furthering the player’s comprehension of what they’re seeing.

A State of Awareness

Scorn’s 2017 gameplay demo showed exploration, gunplay, and puzzle-solving in one of its nightmarish regions. Game director Ljubomir Peklar said in an interview with IGN, “That pre-alpha level we showed is about 80% different right now. That demo was created to show backers we can develop a proper game and an overall potential of what the game could be. It wasn’t supposed to be a final representation of the game.” Still, it does a good job at showcasing the game’s unique environment and the kind of gameplay to expect.

Players control a skinless humanoid wielding a fleshy apparatus with a mouth-like base for attaching weapons. Two weapons shown so far, the shotgun and pistol, are made of the same material as the apparatus and can be interchanged at will. Puzzles are found throughout the map, some in the form of organic machinery that must be interacted with to continue. Players learn new skills, weapons, and items as they progress further into the gameworld.

Inventory will be limited and ammo scarce, preventing players from being anything less than vigilant about their resources. Adapting and utilizing different play styles will be necessary to advance. The denizens of Scorn may be hostile, neutral, curious, or afraid as they react to player actions and adapt to environmental changes. The choice between taking a creature head on or keeping out of sight will be central to the combat, as smart decisions must be made to survive.

Two Parts to a Whole

First announced on November 2014 alongside pre-alpha footage, Scorn campaigned unsuccessfully on Kickstarter. Ebb Software continued development despite setbacks, planning a two-part release. In 2015 the game received private funding and fully entered production, after which a second Kickstarter reached their goal of 150,000 euro. The first part was named Dasein (German for “being there”) after Martin Heidegger’s philosophy, and slated for release in October 2018. Ebb delayed the game, however, planning to release both parts as one whole, and marking the project as TBD.

Promising quality and apologizing for the delay, Ebb offered full refunds to the 5,600+ Kickstarter supporters, saying “We managed to sign an excellent deal with the great investment fund and acquire additional funds for the development of Scorn. The newly acquired resources will enable us to develop Scorn as intended from start to finish, the whole experience, not just the first part.” It’s clear now this deal had to do with Xbox to provide a console version capable of rivaling the PC experience.

Ebb software is unwilling to compromise on performance. Game director Ljubomir Peklar said to IGN, “If developers decided to opt for lower resolutions and 30 FPS they could get more spectacular results, like in the new Unreal 5 showcase a few days ago. What you have to remember is that responsiveness and motion clarity are also part of the overall presentation, so you would still be losing detail in a sense.” Scorn is built in Unreal Engine 4 and Ebb wants to maximize on framerate rather than visually “spectacular” low-res 30 FPS gameplay.

“We didn’t [want to bring Scorn to current-gen consoles] because we want our game to be played at 60FPS,” Peklar says speaking to MSPowerUser. “That would be close to impossible without big sacrifices. Next-gen is about responsiveness, smoothness and a lot less time wasting. The problem with these features is that they are not easy to sell in videos or screenshots.”

“It was about bringing it in line with the PC version. We don’t want to make any compromises and Series X certainly enables us to do just that.” He says, “everyone is touting the SSD as the next big thing, and yes SSDs will help a lot with loading and moving assets, but the biggest culprit that is creating problems in the current generation is the CPU. That’s where the biggest difference compared to [the] current generation will come from.”

Peklar hints releasing the game for the current generation would lead to a gutted version. “If we fail at immersing the players Scorn will simply fall flat. We have various tools at our disposal to immerse the player, from sights to sounds, but we have to make sure we use them properly to elevate and prioritise the psychological component. Next-gen hardware makes it easier because you don’t have to do so much leg work and you can just concentrate on art.”

Scorn will be the first horror game on the next generation of consoles, and being developed exclusively for Xbox Series X makes it a true next-gen experience. Cross-generational games like Assassin’s Creed: Valhalla are hindered by the need to account for old hardware during development. Ebb Software has foregone that problem and left old consoles in the dust to bring its uniquely grotesque masterpiece to life. Though little other than an outdated gameplay demo has been seen, the devs’ commitment to better framerate and performance shows promise.

While games this long in production normally give cause for worry, Scorn isn’t a case of delays and setbacks. Ebb Software tried raising funds to create their vision and when given the chance to receive those funds and develop for better hardware, they made sure to capitalize on the opportunity. Horror fans know atmosphere is everything, and smooth frame rates help to elevate the intensity in every chilling moment. Hopefully gameplay showcasing the title’s current state will be revealed soon, as there is little to go on from the new trailer.

Using its morbid and meaty aesthetic as a stage in which to build a literal living world, Scorn brings a fresh perspective to the horror genre. The weapons made from organic matter pull apart with squelches as the sinewy pieces separate. The walls are littered with veiny red capillaries. The whole game looks like a biology class from hell. Hopefully there’s diversity between regions as the aesthetic, while interesting, may grow old if repeated the entire length of the game.