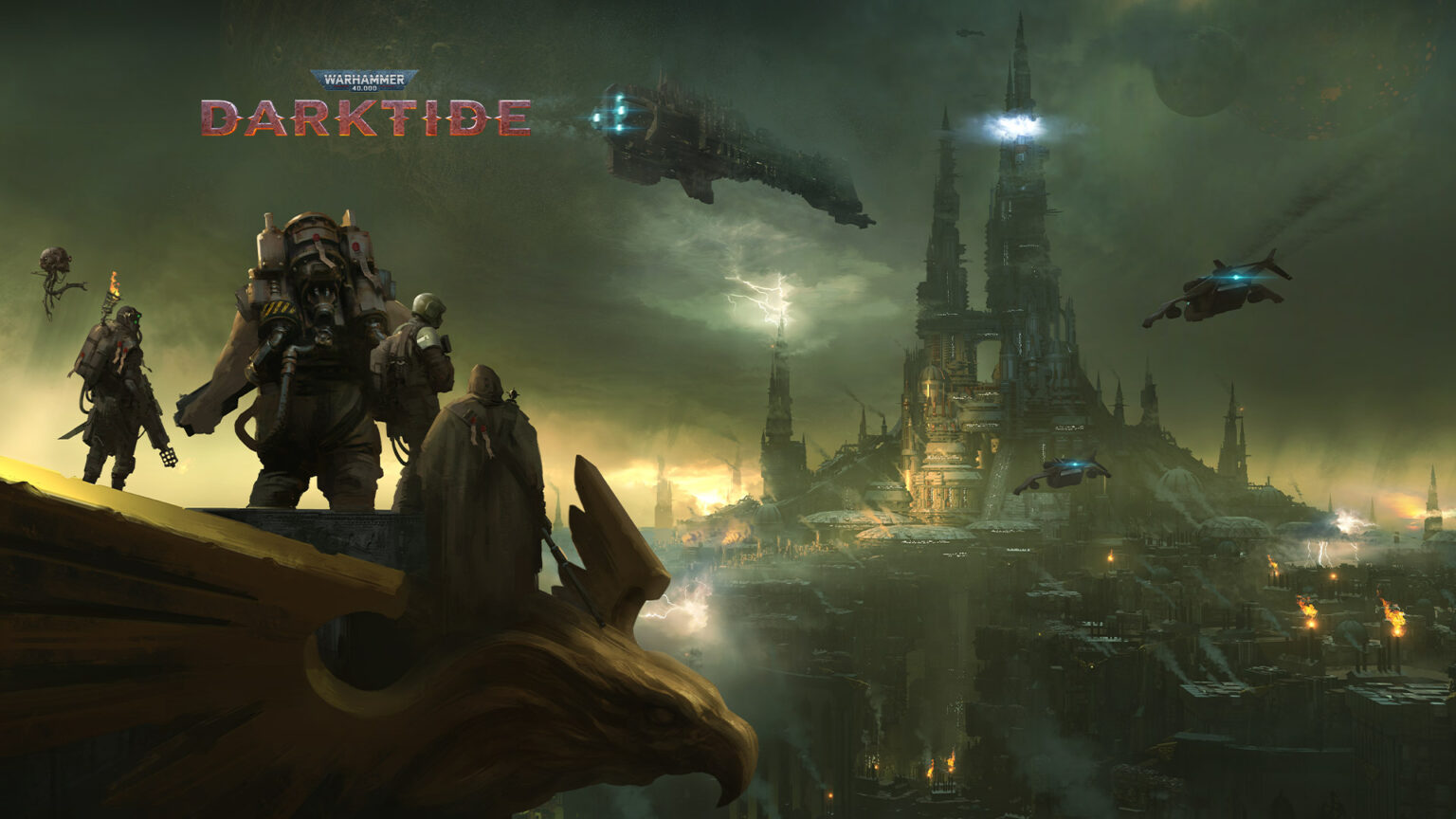 Warhammer 40K: Darktide is the new and upcoming co-op mission-based horde shooter for you and your friends set in the Warhammer 40:000 universe. If you’ve played Warhammer: Vermintide II, then you know what to expect from games like these, except this is the futuristic side of the Warhammer universe. Last weekend, developer FatShark held a closed beta test, and we had a chance to participate. The closed test had a decent amount of content and just enough for us to discuss the game before its release on November 30th. With that being said, here is what we think of Darktide so far.

The Combat and Classes So Far

If you’ve played Warhammer: Vermintide 2, then you will feel right at home with Warhammer 40K: Darktide. The biggest differences are visual engine upgrades, ranged combat, and the futuristic universe as opposed to the medieval one in Vermintide 2. As someone who has played many hours of Vermintide 2, I was enjoying my time with Darktide. Since the game takes place in a futuristic setting, there is much more emphasis on ranged combat as the weapons feel more powerful and effective. If you liked the melee combat in the previous title, then I can assure you there is nothing to worry about. Darktide’s melee combat is as brutal and satisfying as you remember. Hitting enemies has a good weight to it, and the physics adds a lot of believability. The melee combat never gets old, and it’s a ton of fun to hit a giant horde of enemies and watch them ragdoll to their death as you protect your crew by standing on the frontlines.

The closed beta gave you access to all four classes that the full retail version will offer you. The four playable classes are Ogryn, Psyker, Zealout, and Sharp Shooter. During our time with the beta, we’ve only played the Ogryn and the Sharpshooter. The Ogryn is essentially a frontline melee brawler whose signature ability is to charge through a horde of enemies and knock them down, which provides heavy crowd control for your team. He’s the tallest, biggest, and most aggressive class in Darktide and has the most health and melee strength. 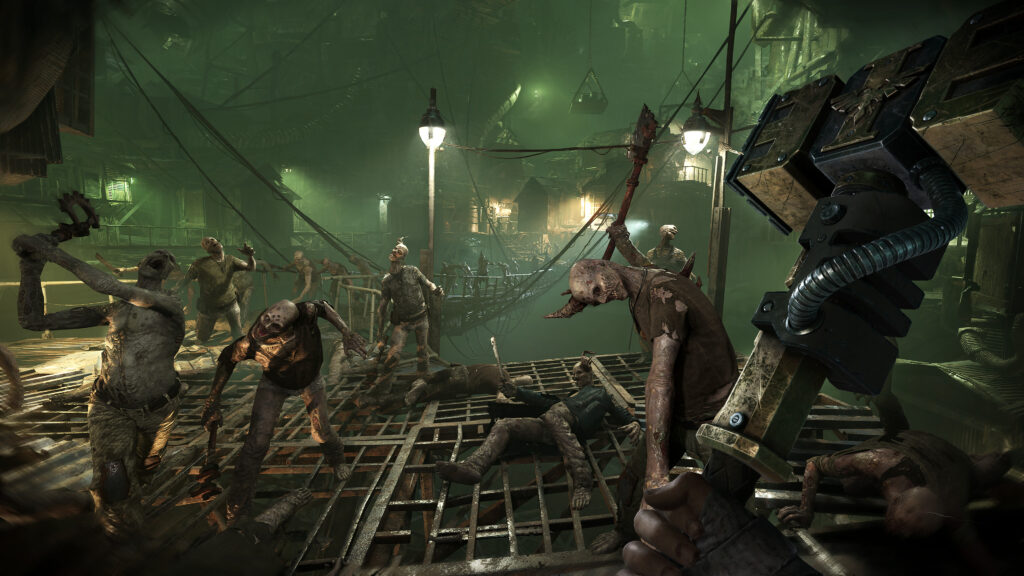 If you are the type of player who enjoys being at the forefront, bashing the crap out of your enemies’ skulls, and defending your teammates, then Ogryn is the perfect class for you. For the ranged weapon, he uses heavier weapons that are slow to reload but pack a massive punch. The Sharp Shooter, on the other hand, is your usual medium to long-range DPS class that relies more on their guns rather than melee. Sharp Shooter starts with a plain rifle that shoots red lasers, it doesn’t have a super fast rate of fire and doesn’t do a ton of damage, but the weapon has a ton of ammo and can be used in medium to somewhat longer range. The main ability of a Sharp Shooter is to buff your team’s damage against elite or boss enemies for four seconds.

As for the Zealot and Psyker, unfortunately, we didn’t have the time to test them out at the capacity we wanted to. But in a nutshell, the Psyker is your space wizard that relies on magic and the Zealot seemed to be a close-range fighter utilizing weapons such as SMGs and moving quickly around the battlefield. We will dive into all four classes a lot more in-depth during our final review of Warhammer 40K: Darktide.

The structure of the game is quite basic. You can play solo with three other bots, quick match with randoms on a mission of your choice, or, of course, gather three other friends and start wreaking havoc. At first, you have to create your operative by choosing your class, then their background history and lore, which changes the voiced dialogue lines between the characters during a match, and then you must complete a tutorial. Once the tutorial is completed, you get thrown into the hub world where you can check your gear, and weapons, interact with other players and embark on a mission of your choice.

Missions can range from assassinations where you kill boss targets, to raids, strikes, and so on. Also, it’s worth mentioning that the objectives are no longer tied to the maps like they were in Vermintide 2, which was considered a turn-off for quite a few players. This is a huge improvement over their previous games. Now you can play any map you wish, and it will have a variety of objectives instead of always being the same, adding good replay value that keeps the gameplay loop from being repetitive. Overall, the gameplay in Warhammer 40K: Darktide feels smooth, fun, and as addicting as ever.

Not only was I impressed with the gameplay and pacing, but the audio and visual production were also on another level. The character models look great, including both the main characters, the enemies, and the bosses. The environments perfectly capture the dark and grim aesthetic of the Warhammer 40,000 universe, and the audio design is off the charts. The weapons sound incredible, the monsters have great sounds, and the music during heavy combat situations is fantastic. For a fast-paced co-op, futuristic shooter, Fatshark seems to have done a good job so far. The game’s brutal violence and gore also add a ton of quality to the overall atmosphere and feel. 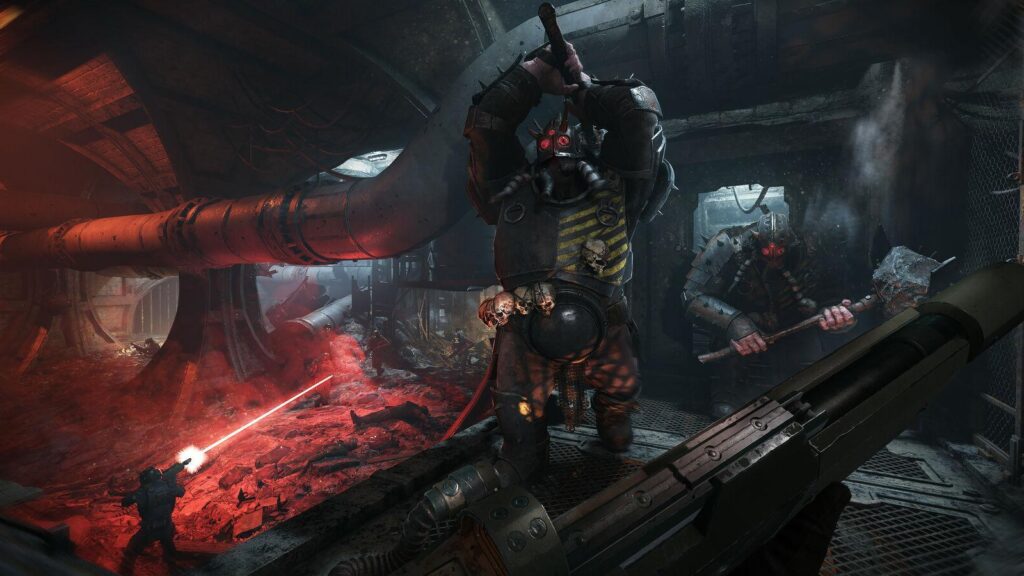 What I like most about Fatshark is that they do their best to stay true to the source material, and it shows. I think it’s fair to say that any Warhammer 40,000 fan will appreciate the amount of work and effort that went into the production values. However, I will have to say that this game does make your PC struggle a bit. I have a powerful CPU, but my GPU was struggling, and Warhammer 40K: Darktide is starting to show the age of some of my PC components. Just to give you an idea, the game was running at max settings at 1920×1080 resolution and was averaging around 30 FPS or even lower depending on the situation. My PC was equipped with a 1660 Ti, so the performance issues weren’t surprising to me. Although, it’s the first game that was performing so poorly on my system. A friend of mine who also managed to get into the closed beta was not having ideal framerates on his Nvidia 3070 RTX GPU either.

The game will push your system, even if you are trying to play at lower resolutions, such as 1080 or 1440p. Hopefully, by the time the game releases, new drivers will be out, and some performance optimization will occur. Otherwise, get ready to either upgrade your GPU if you want to play at decent settings with good framerates or build a new PC if you are way out of date.

I liked Warhammer 40K: Darktide from what I played. Despite the average 30 FPS that I was getting due to my lackluster GPU, I still had a ton of fun slaying hordes of monsters in this awesome universe. I had a feeling that this game was going to be good, but so far, it’s exceeding my expectations and that is a great sign. I strongly believe this will be the best co-op experience you’ll play this year and in years to come. We cannot wait to jump into the full release with our friends, level up our favorite classes, and have fun. So far, so good. Be on the lookout for our full review, where we will discuss the game in much greater detail and cover all of its classes, missions, and everything else it has to offer.