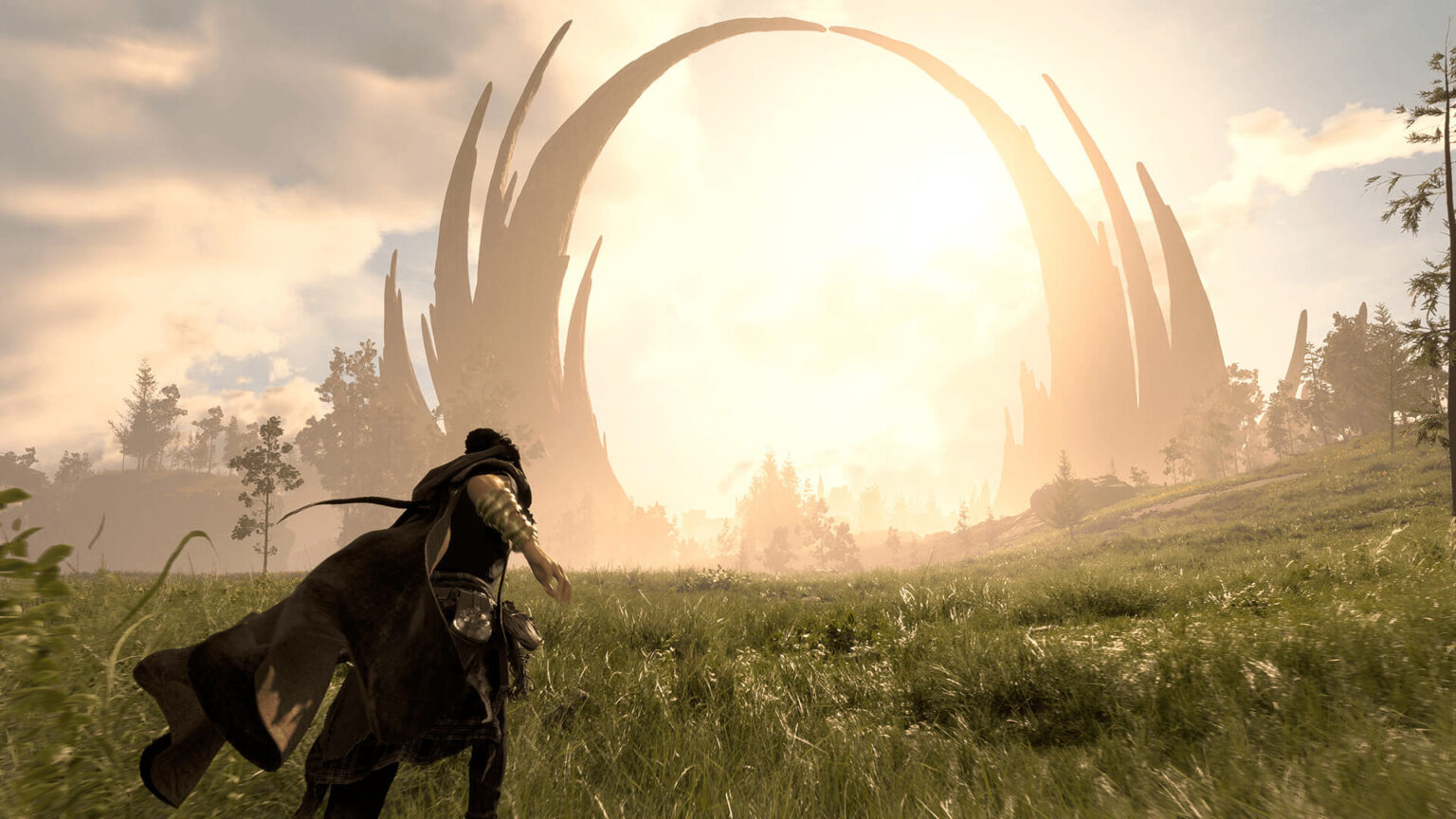 The Forspoken Demo Enourages Me Not To Buy The Game

The Forspoken demo is great because it will stop several gamers from spending their hard-earned cash on what could be the most disappointing PlayStation 5 game to date. The hour of gameplay dwindled my excitement for the upcoming game thanks to its barren world, ill-designed combat, and unbearable dialogue.

The demo places Frey Holland in the middle of Athia, a fantasy world she is destined to save. My first observation was the horrifically plain graphics. There is no life in this world. No leaves floating in the wind. No sunbeams, and no texture on the ground. Simply … dead. In my PlayStation 5 media gallery, I have a screenshot from Forspoken right next to a screenshot from Horizon Forbidden West. The difference is staggering. In Forbidden West, there is fog in the distance, the air has a pink hue from the sunset, and the ground is splattered with plants and details. Forspoken is bare by comparison, like a game early in development without all its assets.

I do take into account that this is a demo build, but it’s difficult to imagine much changing before release. One explanation could be the context of the world, which isn’t explained in the demo. Death Stranding, for example, is designed to be empty and maybe the same could be said for Forspoken. However, one can’t deny that the visuals and textures are generally not up to par. I remember when I first saw Forspoken and it looked like a true next-generation game that showcased the PS5’s power. Oh, how wrong I was.

Upon entering the demo, you will complete a short tutorial on movement and combat. In contrast to the world, the abilities are aesthetically pleasing, thanks to an onslaught of bright particle effects. You will swing a fiery sword, create a huge fire wall, and blast enemies with rocks. One power has you holding down the fire button as a mass of rocks builds upon itself until you launch a boulder like a rocket. Despite their visual appeal, none of the powers are executed well. 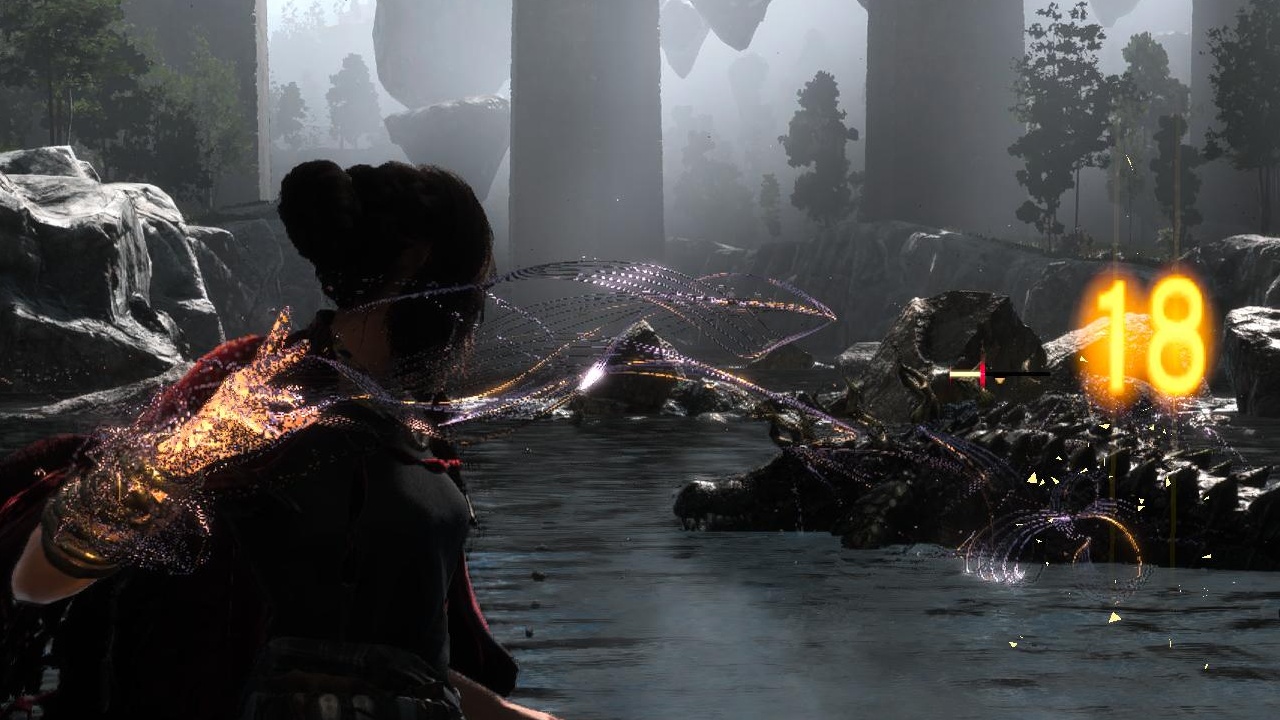 I played as a mid-game Frey, meaning I started with several powers without much explanation of how they work. I expect the full game to drip-feed these powers so I can properly learn each one before unlocking the next. Therefore, I won’t fault the demo for the overcomplication and confusion of its vast list of powers, but there are some basic mechanics that severely hinder the execution of combat. The first is the lack of a melee button. Instead of having melee consistently mapped to the same button, you have to pull up your power selector, use the d-pad to switch to the appropriate wheel, then select a power that has melee capability. To the game’s credit, once you have a power selected, you can click left or right on the d-pad to switch to melee, but even that feels more cumbersome than it should be.

Generally, the weapon wheel implementation is cumbersome, creating a disruption in combat flow. No one wants to pull out a weapon wheel, switch between multiple wheels, select a passive and active power, use those powers once then open the wheel again to select another power. Additionally, there is no way to zoom in with your ranged attacks, you always shoot from the hip, and the lock on mechanic is barely noticeable. To top it all off, when you are not shifting through menus, combat usually entails nothing more than consecutively tapping the triggers and pressing the circle button to dodge. There are a lot of moves, but underneath all the power, combat is surprisingly boring and tiring on the fingers.

Before playing the demo, I thought Forspoken’s redeeming quality would be combat. It was pleasing to watch, but actually playing it is another story.

Exploring the world isn’t much better. Forspoken falls into the traditional open-world design of traveling to waypoint towers to unlock icons for your map. These points of interest don’t hold anything interesting and instead signify enemy encampments or collectibles that give you some upgrades. There were no missions to explore or diversity beyond: pick up this thing or fight these people. I did run across a slide puzzle, but, just like combat, the execution was terrible. It was annoyingly difficult to know which block of the puzzle I was moving, which made an easy puzzle overly complicated. I’m not sure how the main game will differ, but if the demo is any indication, then Forspoken will be a boring checklist in a barren world.

Additionally, the characters will not shut up while you explore, or at any point in the demo. After God of War Ragnarok, Forspoken’s dialogue seems unbearable. Frey and Cuff, the sentient bracelet companion, are constantly bickering with each other, but not in the friendly Uncharted kind of way. The characters actively dislike each other, or at least it comes off that way. The juvenile negativity is tiresome and completely unnecessary. On top of that, combat banter is insufferable. Here are some of the things Frey blurted out during combat:

“Let’s turn up the heat”

“I’m getting to be one tough customer”

Quips like that are relentless. At one point, Cuff suggested “less talking, more fighting,” and I desperately wish Frey would take his advice. I can’t say Frey is a bad character because I haven’t seen her in a real cutscene or explored her development throughout the story. However, what I can say for sure is that her ambient dialogue is annoying.

The Forspoken demo is only an hour and it’s an early build. Consequently, it isn’t enough to determine my verdict, but it does give me a strong indication that you and I will not enjoy the game when it is released on January 24, 2023, for PlayStation 5 and PC.