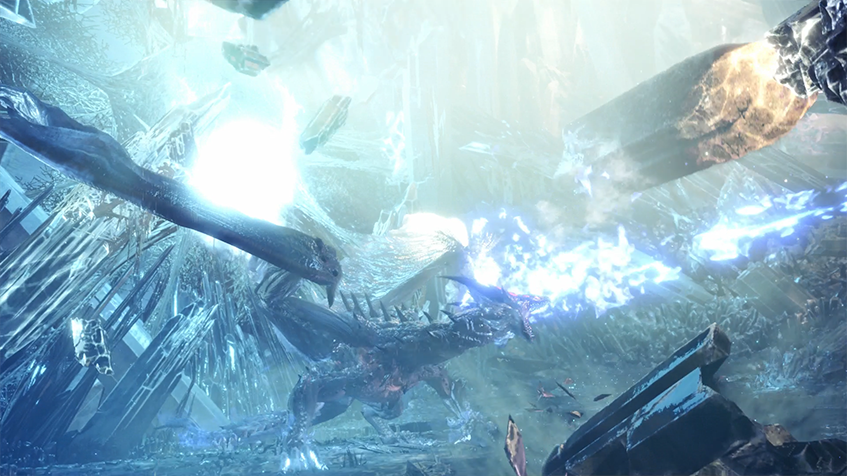 Monster Hunter World: How to Slay Xeno’jiiva – Tips and Tricks

Monster Hunter World: How to Slay Xeno’jiiva – Tips and Tricks

In the crystal caverns of the Elder’s Recess, Xeno’jiiva awaits hunters as a final test of skill.This massive elder dragon is born of the energy collected by the Elder’s Recess, using it to fire devastating attacks at its foes. This hunt takes place in an arena away from the main map and takes place over two different stages, each large enough to accommodate this colossus of a dragon. Here are some tips and tricks on how to navigate the final battle of Monster Hunter World.

1 – The Two Stages of Battle

Hunters will find Xeno’jiiva in an underground cavern beneath the Elder’s Recess where the monster has appeared for the first time. The first and second phases of the fight do not change how the hunter should go about attacking the monster. Try to focus mainly on the tail and glowing front legs while attacking the monster. Due to its giant size, Xeno’jiiva can clear the entire map quickly. It takes time to catch back up, so avoid being directly in front of the monster while chasing it down. During the first phase of the fight there are several cracked stalactites on the top of the cavern, around the edges. These can be hit by a ranged weapon or slinger ammo. Break them off so they fall onto the monster and damage it. To do this, try to bait Xeno’jiiva over to the area below the stalactites. Take advantage of these clusters to do a large amount of damage all at once. Also, during phase one, keep in mind that the monster’s tail cannot be cut off, so don’t be discouraged if it seems like the tail has taken a huge amount of damage without coming off.

After enough damage has been done to the monster it will take off and fly to the upper part of the map, which begins phase two of the hunt. During this phase, hunters can find cover from Xeno’Jiiva’s attacks behind the many crystal pillars scattered across the stage, very useful when caught at a distance from the monster. Hunters can also cut the tail of the monster off during this phase, which will happen pretty quickly if enough damage has been done to it during the first phase. 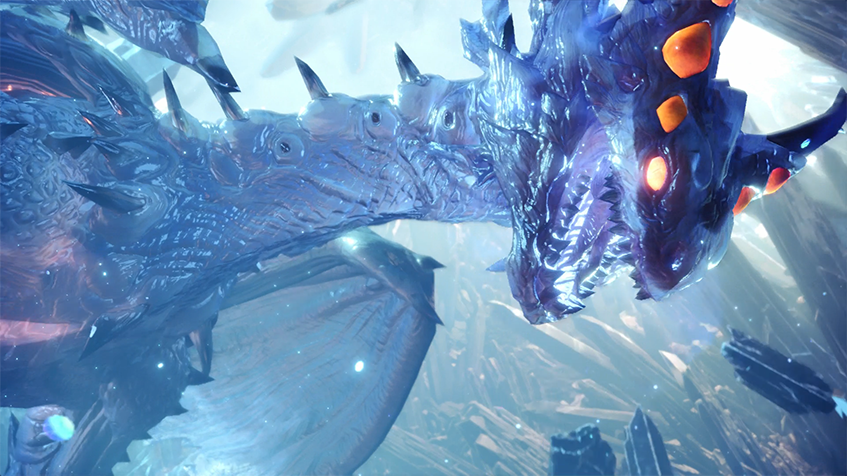 Xeno’jiiva has four major attacks that fire dragon elemental energy at its opponents. First, the monster will fire out three balls of energy to the left, right and center in front of it. Watch the trajectory of these blasts and try to stay between them. Move intentionally, but don’t worry, they don’t change course once fired. Second, the monster will fire out a massive beam of energy in front of it that will cover the entire map. This attack can happen in two ways: either it will fire it in a straight line directly in front of it, or in a massive arc from right to left. The best place to be during this attack is behind the monster’s head. This will be out of the damage zone and also create a great opportunity to get in some damaging combos due to the duration of the attack itself. If caught away from the monster, try to find cover behind one of the crystal pillars around the map.

Third, Xeno’jiiva will stand on its hind legs for a moment before slamming its front legs down on the ground. Not only will this attack knock down anything hit directly by it and stagger those too close to the impact, after a few moments a delayed explosion of dragon energy will blast out from the ender dragon, which can easily one-shot a hunter. When you see the monster stand up, get as much distance away from the monster as possible to avoid the damage zone. Last, Xeno’jiiva will rear up on its hind legs again, but this time will fire another beam of energy that will cut the ground directly in front of it, then move around at a distance across the map before fading out when the monster seems to lose control of it and it fires at the ceiling. Once again, do everything possible to get behind the monster during this attack to avoid the damage areas. This attack is very sporadic, making it difficult to judge the trajectory of the beam. So if caught in front of the monster, find cover as soon as possible. 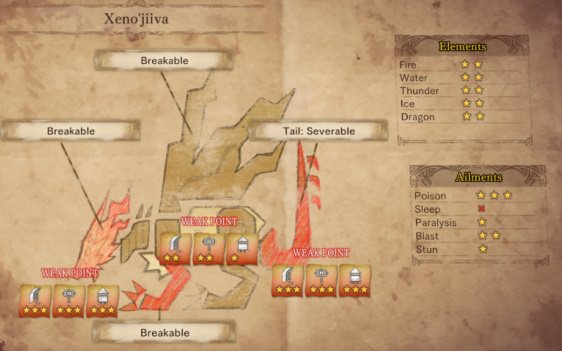 Xeno’jiiva has three major weaknesses on its body: its head and front legs, which can both be broken, and its tail, which can be cut off. The monster takes medium-level damage across the board from all types of elemental damage, so having a powerful elemental weapon will help give a slight advantage during battle. Xeno’jiiva cannot be captured or put to sleep, but does take high-level damage from the poison ailment. Bring along some poison smoke bombs to get in some decent damage-over-time during the battle.

While Xeno’jiiva is not particularly quick, if one of its attacks connect, it will do a massive amount of damage. Keep close to the monster’s chest during battle to avoid the major damage zones. Once hunters have learned to navigate its telegraphed attacks, this monster will be easily put on farm status. This is an epic battle, and a fantastic way to bring the hunter’s journey to an end.