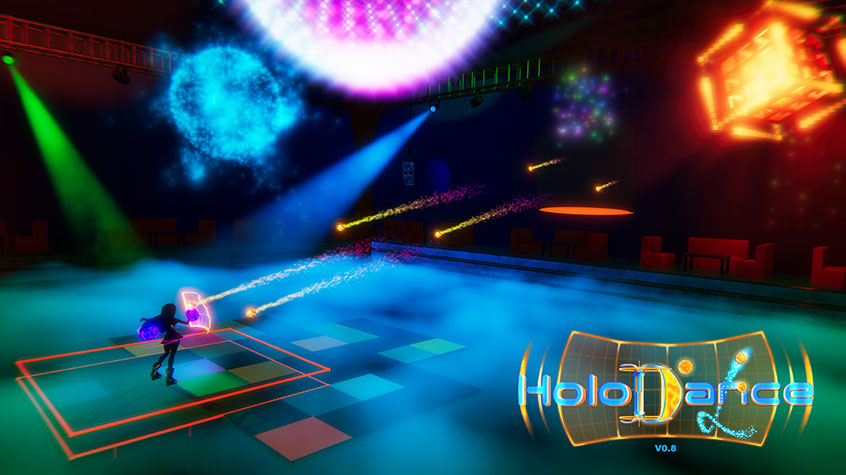 Narayana Games announced that their virtual reality rhythm game Holodance has just received a new mode that lets players experience all of the game’s environments in a very different kind of visual appearance: As a Christmas present to its players, Psychedelic Mode has been added to the game just today.

Check out the update trailer of Holodance, featuring some gameplay footage:

“Psychedelic Mode is activated via the game’s settings under Style / Psychedelic Settings. There are currently Color Effects, Time Dilation and Strobe Lights, each with a few options to adapt the effects the player’s likes.

Color Effects first links the current combo with the saturation: Before the player catches the first orb, it’s all black and white. Then, gradually, with each orb that is caught without missing one, the game goes over normal into a fairly over-saturated look until players has caught 48 orbs, which also gives them the 4x combo multiplier. This event is combined with Time Dilation, causing the game to go into a bullet time like state for the player to catch the important orb. Right after that, the Strobe Lights flash for a few seconds.

And this is where the real psychedelic experience starts: Now, each orb that is caught shifts the hue a little bit, completely mixing up the colors. Depending on the environment, this effect can be kind of subtle, mostly just changing the colors of the orbs a little bit – or really dramatic.

When players keep catching every orb, successfully tracing every Slider and spinning every Spinner, eventually a Long Combo is achieved – and now that color cycling moves on its own.

Finally, players that master any one of the almost 60,000 beatmaps for almost 12,000 songs and not miss a single orb will get to the final bullet time slow down so the can finish that last note with their coolest move.

While the Holodance Avatar system is just an option for players that want to use it for creating videos, it certainly helps make gameplay videos more entertaining.

narayana games is an independent game development studio focussing on VR, AR and multiplayer and was founded exactly 6 years ago, 2011-11-22. Based near Munich at Lake Ammer (Ammersee), Germany, the game studio has an international team collaborating all over the world. The current project, Holodance, is a Virtual Reality rhythm game released on Steam into Early Access on April 5th, 2016, which evolved from “Dancing with Dragons” into “Virtual Clubbing with osu! beatmaps” within roughly one year and keeps on evolving based both on player feedback and the companies own creative flow.”

For more information on Holodance, visit its official website.