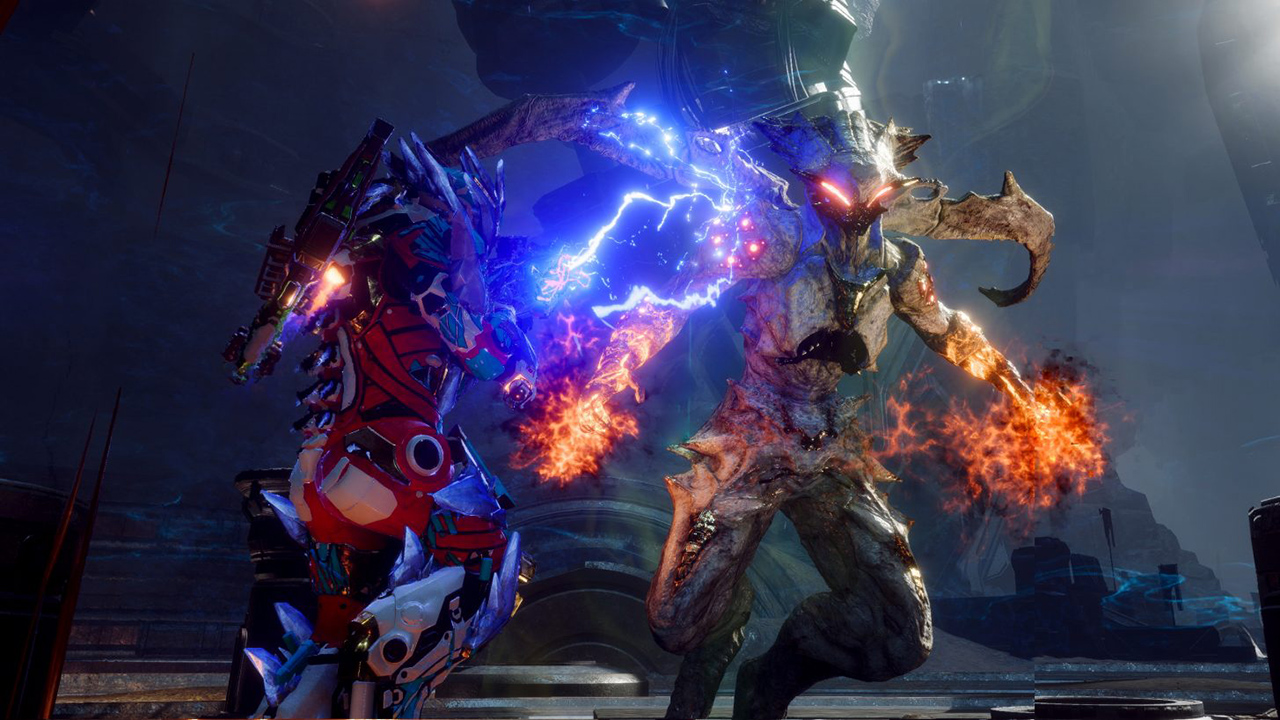 Beyond the walls of Fort Tarsis, you’ll have only your wits and your Javelin exosuit to keep you alive. The Storm Javelin is just one of those exosuits, and it comes with a whole host of unique abilities to control and explode the battlefield. Picking this Javelin will see you take up a more traditional ‘caster’ role, slinging cyber-spells and manipulating the battlefield just like a traditional mage. Instead, however, you’re a digital wizard with a whole host of amazing ways to take on your foes. Today, we’ll be taking a look at what the Storm can do, what you can equip it with, and how it can be used to conquer the wilderness in Anthem.

The Storm Javelin is potentially the most unique in Anthem, both in terms of its background and play style. The devs note that:

“The Storm Javelin first arrived in Fort Tarsis as a rumor. Developed by the Dominion in their Northern home of Stralheim, the Storm uses a powerful technology known as “seals” to boost the latent kinesis powers of its lancer. The result is a Javelin that can float effortlessly above the ground and unleash the raw energy of the Anthem.

Only through painstaking Arcanist research has anyone outside the Dominion had a chance to wield the awesome potential of the seal technology. And while the Storm can channel unbelievable amounts of elemental force, it has little in the way of defensive capabilities and requires an expert pilot to stay above the fight and dish out damage from a safe distance.”

The Storm is the Javelin of choice for those who want to stay high in the sky and rain death down upon their opponents. It is also going to be one of the more technical Javelins to pilot. Attention will need to be paid to flight time, hover capability, damage output, and elemental effects. The reward for a talented pilot, however, is a Javelin that can harness the very power of the Anthem itself, and unleash that power upon your enemies in earth-shattering blasts of the raw elements. 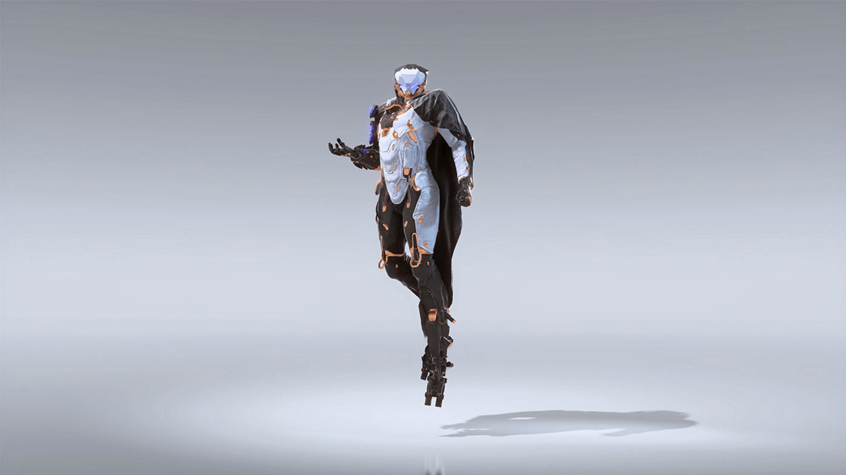 Pick the Right Tool for the Job

Let’s get started with some of the weaponry and build options you can expect. Each Javelin can have two separate loadouts at launch. The Storm has access to all the weaponry of Anthem except Heavy weapons, which are Colossus exclusive. This means you can rock Assault Rifles, Submachine Guns, or Sniper Rifles with no problem. The challenge, when building, is to pick something that will fill your play style and your build. The Storm is very element-focused, so players will have to manage their sources of elemental damage carefully. A good combination of element ‘priming’ and then ‘detonating’ will see enormous damage potential. Otherwise, the Storm can be dedicated to a certain aspect of elemental damage to combine with a larger tactic in a full squad for some truly devastating combos.

Much like the other Javelins, the Storm is going to be really interesting to build. Careful choices, and some lucky stat-rolls when farming gear, can lead to an insanely well-synergized Storm build. Even more than any other Javelin, complementing your elements with your build choices will be absolutely crucial. Want to set all your enemies ablaze to wreak havoc in tight spaces? Go fire. Need to cut down armored enemies or bosses? Corrode them with Acid damage. Want to live up to your namesake and harness the storm to cut down hordes of enemies? Embrace the lightning.

Players will also have to decide exactly how much of their loadout to dedicate to staying in the air, as the Storm is one of the most delicate of Javelin chassis. With a dedicated shield that absorbs fire, you can resist some damage, but losing your shield completely will ground you for a long time, severely limiting your effectiveness. Staying airborne is incredibly important, especially seeing as most of your abilities work best from a high vantage point. A pilot who can stay airborne, and rotate their equipment effectively, will truly embrace the Storm.

The Storm has the same layout of options as the other Javelins, albeit with very different choices. Its melee ability is fixed (just like the others), but offers some handy utility, too. It’s called ‘Fiery Strike’, and delivers a quick punch forwards using the suit’s elemental seals to push enemies back and create some distance. Extremely handy for when you need some space to cast your abilities. 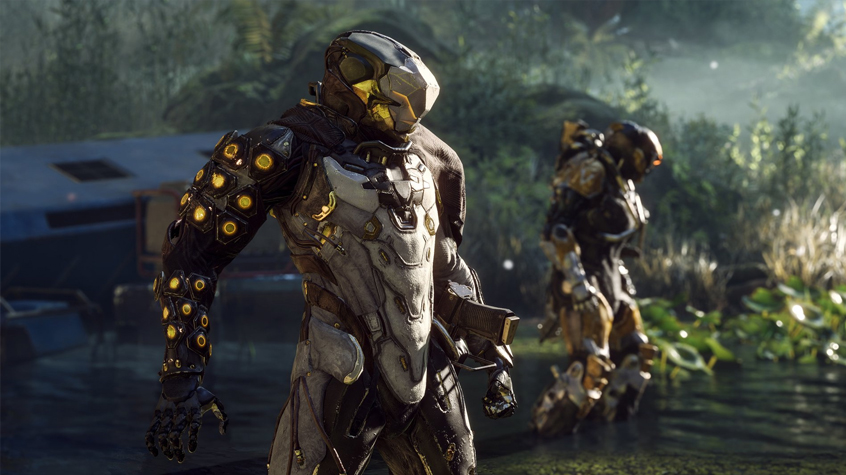 Blast Away with the Storm’s Seals

The right arm equipment for the Storm is a selection of ‘Blast Seals’, each dedicated to a specific elemental effect. Lightning Strike is a satisfying AOE blast. Ice Storm creates a field of ice that damages enemies, building up to a final frosty explosion. Flame Burst is a quick blast of searing heat. Rime Blast fires a quick flurry of ice projectiles, which deal damage and can even freeze targets solid. Finally, Living Flame sends out a wisp of fire that seeks enemies and sets them alight.

These seals are all damage focused, and each delivers a specific elemental effect. This means you can use them to ‘prime’ targets with an element, before detonating the combo with either your own abilities or an allies. Some good game-knowledge is going to be required here, but it’s certain that over time we’re going to see some truly frightening displays from the Storm and it all starts with these Blast Seals.

Focus your Power with Seals

In the other category, you’ll find Focus Seals, which can either support or combo with the Storm Seals. Hoarfrost Shards rapidly fires small ice-shards that gradually freeze enemies in place. Fireball is the classic charged-up AOE ability, but can also be fired in smaller projectiles. Ball Lightning shoots an electric charge that ricochets and can hit multiple targets. Glacial Beam fires a powerful beam of ice energy, great for focusing down single targets. Finally, Arc Burst unleashes a blast of lightning that leaps between enemies for heavy damage.

Now, a lot of those abilities sound very similar; ultimately, they all do various types of damage. They all apply that damage in different ways, however, and will see a wide variety of uses depending on the situation. Sometimes you’ll take a combination of different elements to ensure you can deal with a variety of targets. At other times, you’ll need a specific damage type to take down tougher opponents, or combine with the elements of your teammates.

I’ve mentioned elemental combos a lot so far, and that’s because they’re naturally intrinsic to the Storm’s damage pattern. Mages in traditional RPG/MMOs often provide a certain aspect of damage that complements and enhances their team, and Anthem’s mage-archetype is no different. The Storm will be extremely rewarding for players who enjoy learning and utilizing their abilities to maximum effect.

Much like the Ranger, the Storm’s Support abilities are incredibly useful and only increase in effectiveness the larger your squad. Wind Wall will create a one-way wall of blocking energy. This will absorb enemy projectiles, while allowing you to shoot and cast abilities through it. Either use Wind Wall to massively reduce the damage your team takes from powerful enemies or big packs of smaller enemies – or use the wall to block damage while trying to revive team mates for clutch team play.

Otherwise, the Storm can choose Nexus, to create a field of energy that reduces cooldowns for gear for yourself and nearby allies. There’s not a single situation where this isn’t useful, and Nexus will be incredible for speeding up tough fights and dungeon runs.

Overall, the Storm’s Support abilities will make them incredible allies in any team. Wind Wall can massively increase your toughness in the face of high damage, while reducing allied cooldowns will always be in demand with Nexus. 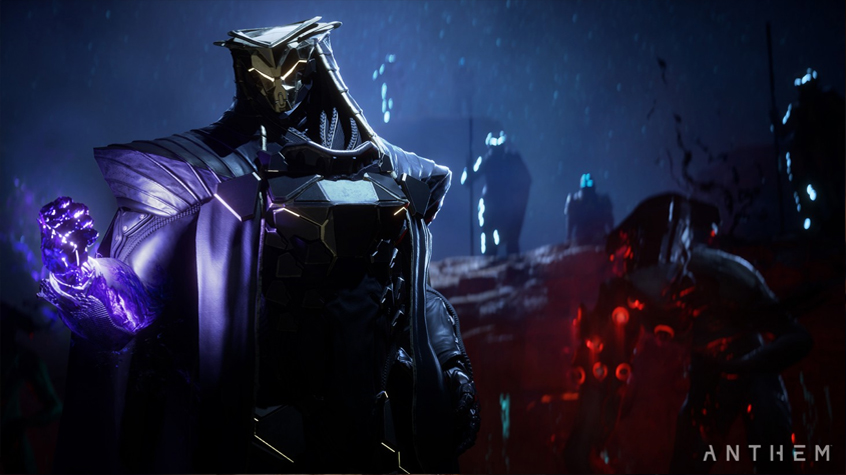 Bring the Sky Crashing Down on Your Enemies

The Storm’s Ultimate Ability, Elemental Storm, sees you place successive blasts of Frost, Electricity, and Fire, before ending the show with a shower of enormous meteorites. This ultimate is absolutely insane, no doubt about it. Much like the other ultimate abilities, it works best against large packs of enemies, but really Elemental Storm should be used as often as you like to remind your enemies who owns the sky.

The Storm embodies the mystical, destructive energy of the Anthem itself. Piloting this Javelin will strike fear into the hearts of any enemy, no matter the size. The devs say that:

“With its elemental power and minimal armor, the Storm has a reputation for being a tempestuous Javelin that can spell disaster for even experienced pilots. But ask anyone who’s survived a fight with one and they’ll tell you that there’s no doubting the strength of the Storm. Whether the Storm suits your style as a pilot, your needs for a particular mission, or just your mood that day, it’s a great addition to your arsenal of Javelins.”

It certainly isn’t the easiest Javelin to fly, but it might just be one of the most rewarding. Those who have mastered the Storm will be a sight to behold, and I’ve no doubt we’re going to be seeing some absolutely insane builds and combos come from top-tier players when they get their hands on this powerhouse.

That’s it for our Storm Javelin introduction and overview, guys, but keep posted closer to launch for more in-depth guides, builds, and gear choices. I’m almost done covering all the Javelins, but now it’s going to be on to specific build guides and tips, so stay posted if you‘d like to know more. Let me know in the comments section below which Javelin you’ll be piloting out beyond the walls, and I’ll see you all next time in my next video for the ninja that won my heart, the angry space bee himself: the Interceptor.

Don’t forget to check out more of our Anthem coverage, and our other Javelin guides here:

Anthem’s Roadmap is Just What We Asked For ﻿ | Gaming Instincts

[…] EVERYTHING YOU NEED TO KNOW TO EMBRACE ANTHEM’S STORM […]