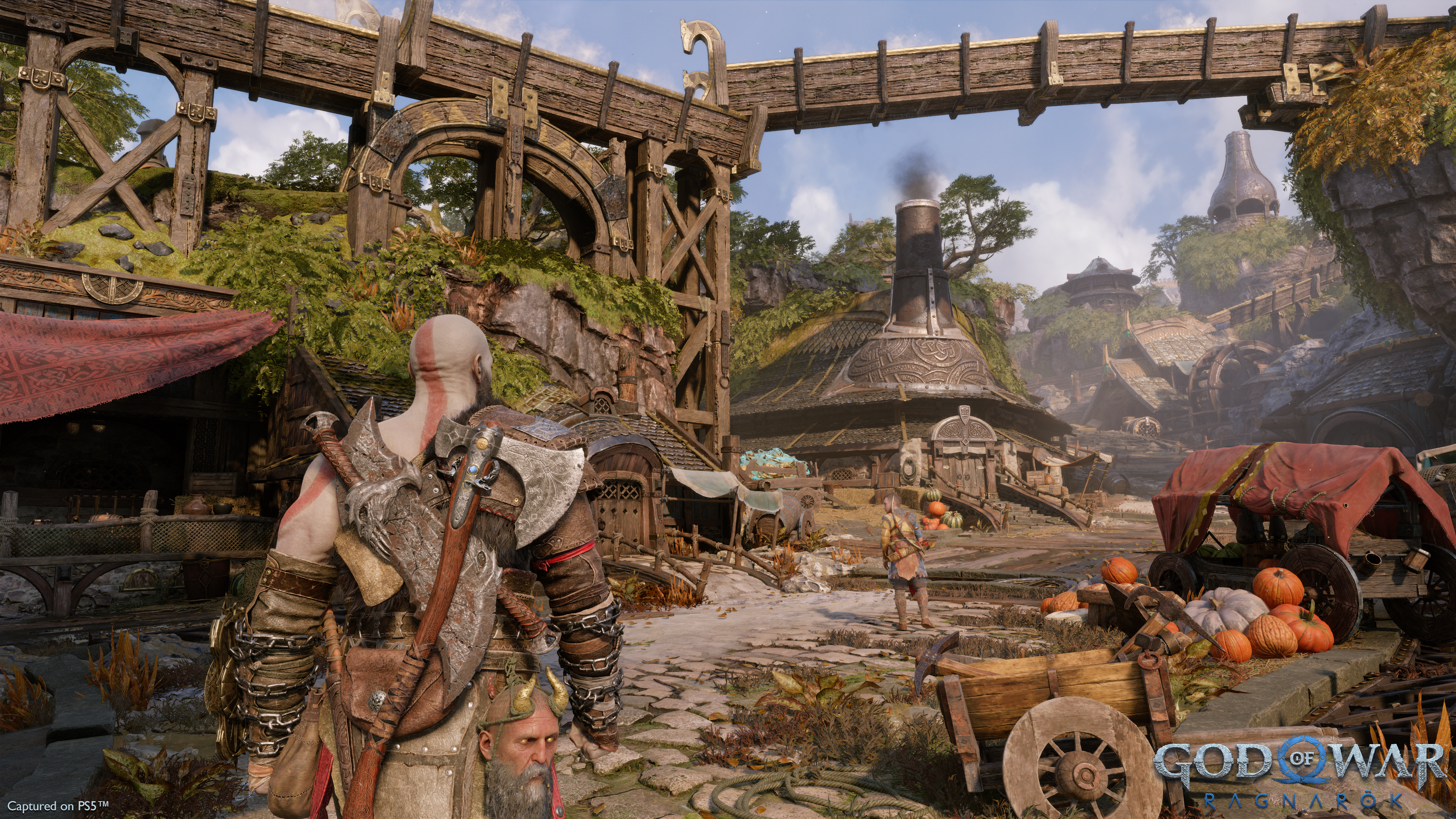 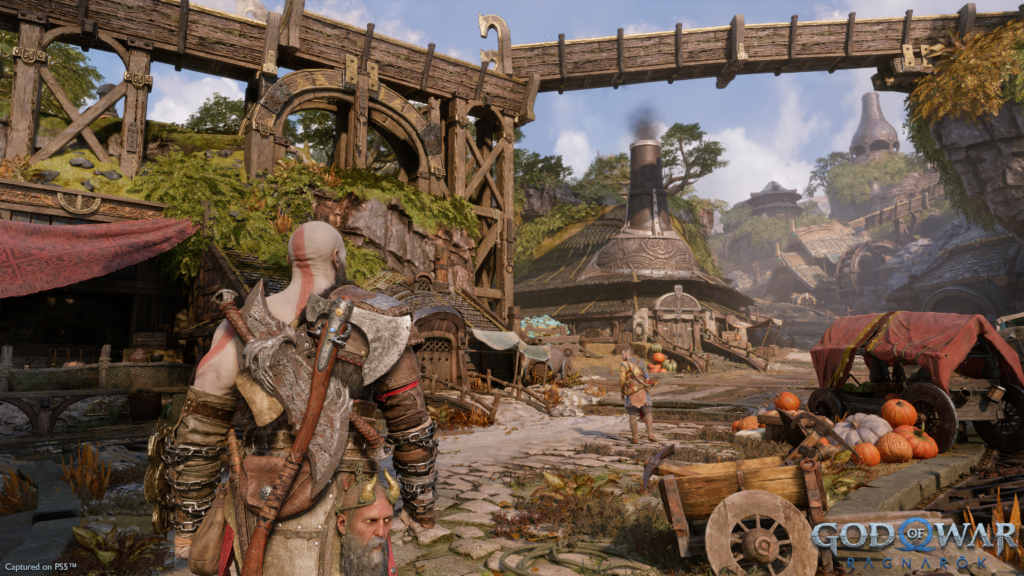 God of War Ragnarok is PlayStation’s next big game for the PlayStation 5 and PlayStation 4. Thanks to Sony for letting us jump on the game a few weeks before its release. Today, I will discuss the game’s early hours while trying to keep it as spoiler free as possible. Without further ado, here is what we think of God of War Ragnarok so far.

The game’s beginning is much more eventful than the original God of War 2018. I won’t go into details about what happens as it would spoil too much of the story and ruin the fun of the whole thing. But I can say the game starts about three years after the previous entry, and if you saw the “true” ending, then you know who, and what is coming for you. Early on, you will enter a new realm that you weren’t able to visit in the previous game.

What I like about the start of God of War Ragnarok is the build-up of characters, both new and old. I won’t tell you who they are because I prefer not to spoil it for you, but you can probably guess for yourself. Despite the game being more eventful at the start, it still has a slower section before it kicks into full gear. There are several cut scenes, dialogue, and introductions before certain plotlines take off. There are, however, breadcrumbs pointing at future plot points in every cut scene.

There is also a strong dynamic between father and son involving lots of arguing, frustration, and trust issues from both sides of the coin. If you’ve played the original game, then you know what to expect from the relationship between Kratos and Atreus. Atreus is trying to figure out who Loki is, meanwhile Kratos is worried and concerned for his son’s safety. I won’t touch anymore on the story here, but that is the basic plot point. Let’s talk about the gameplay flow and combat.

The game feels similar to the previous title, so if you liked it back then, then you will like it just as much, if not more, now. The Blades of Chaos and Leviathan Axe are available right off the bat. In the last game, you had to reach a certain point in the story to unlock the Blades of Chaos, but not in the sequel. The traversal, exploration, and puzzles are almost identical to the previous game. There are plenty of Odin’s ravens to find and destroy, Norir Chests to unlock, lore and artifacts to find, and favors (quests) to complete. It was smart of Sony Santa Monica to go the route of “If it ain’t broken, don’t fix it,” and the early game showcased pretty much that. God of War Ragnarok plays like and follows the exact same formula as the original game.

The biggest difference so far is the number of cut scenes you’ll encounter and the storytelling. Ragnarok is cut-scene-heavy, which might turn some people away, but I love how the game’s universe portrays Norse mythology, and the scenes are well executed. Yeah, it can be overbearing, but the excellent storytelling makes up for it. Also, the early game introduced new and intriguing enemies, fixing the lack of enemy variety from the first game. I am happy to report that I have yet to encounter troll #34 in God of War: Ragnarok. The re-use of trolls in the previous game was obnoxious, and I haven’t run into anything like that yet. 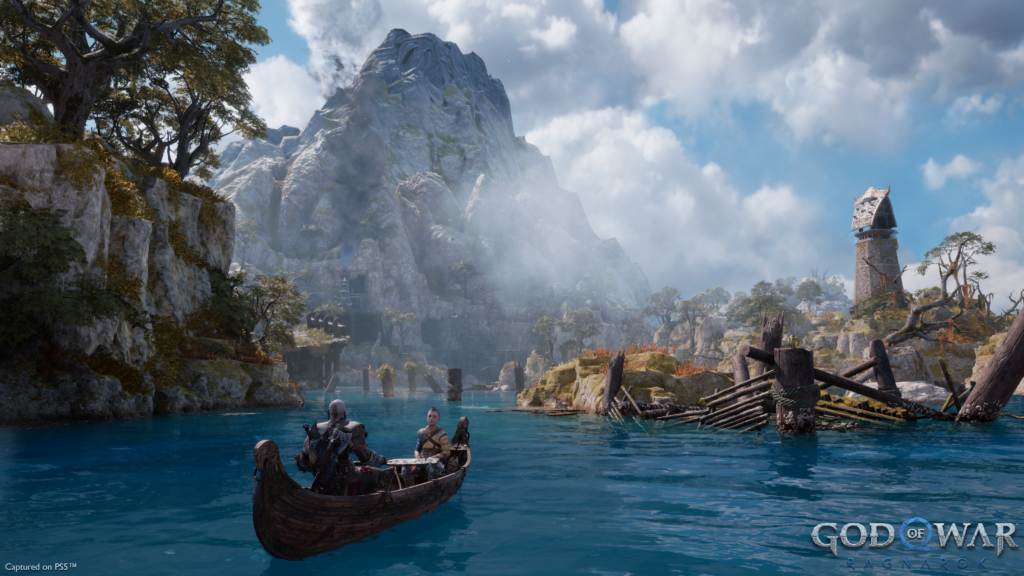 During the early hours of exploring, there was an overreliance on “go through this cracked rock” or “lift a pillar to pass through” moments. The early game was full of those, and I am not sure if it’s for “cinematic” purposes or environmental storytelling, but there was way too much of it. I am hoping there is less of this as the game progresses, but even after five hours or so, that doesn’t seem to be happening. I’ll go out on a limb and assume these exist because the game was originally made on the PlayStation 4, which is almost a decade old. It didn’t detract from the experience exponentially, but it did break up the pacing.

Overall, I am really liking where God of War Ragnarok is going based on the early hours. The main question is if the final ending is worth all the wait and excitement. And, of course, how the rest of the game carries its lore, characters, and gameplay elements until the very end. Based on what I played so far, I think that Sony Santa Monica could be onto something special once God of War Ragnarok releases on November 9th, 2022.