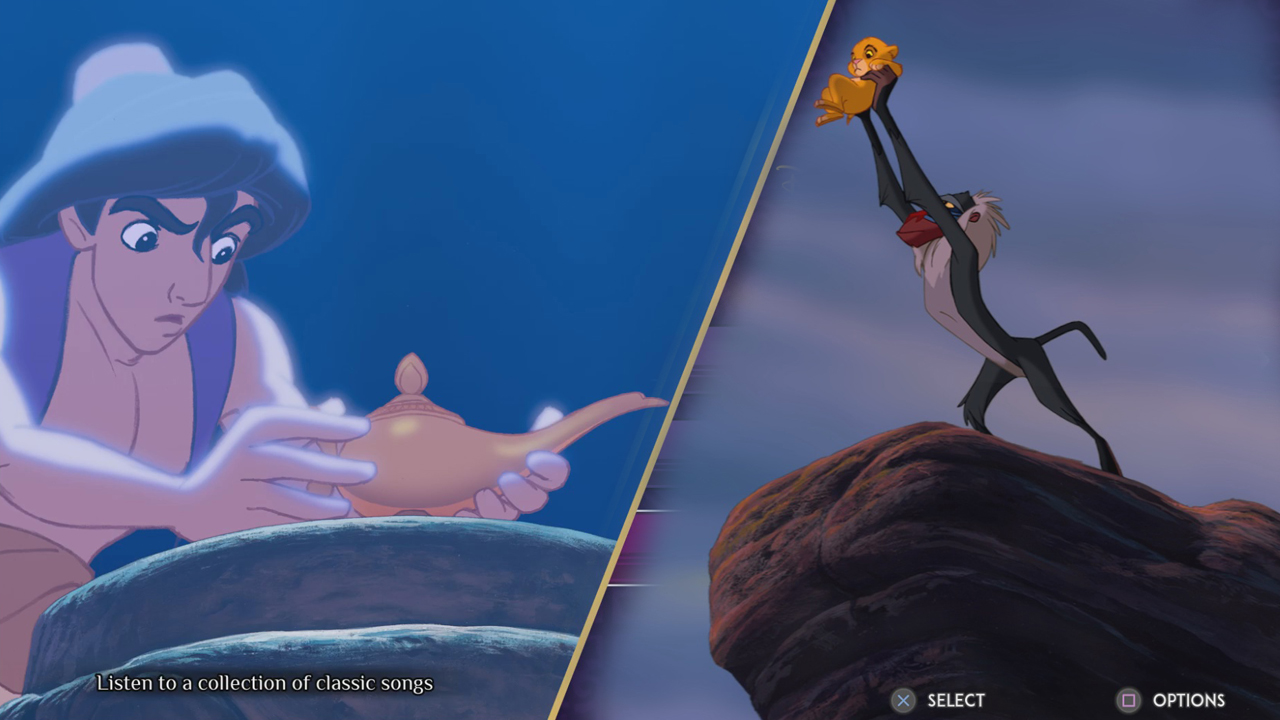 NOTE – A copy of this game was provided to Gaming Instincts by Disney Interactive for review.

Disney is known mostly for their classic films these days, such as Peter Pan, The Lion King, Aladdin and more. In fact, these movies have been around for so long that any games that were released during that time were lost due to most people not owning and NES or Dreamcast in the 90s. Well, thanks to Disney Interactive, they’ve decided to bring these games back home to consoles in 2019, with all sorts of new features that will make gamers’ experience more enjoyable. Aladdin and The Lion King were the games Disney decided to bring back from the past to show the new generation how much effort was put into these games.

Aladdin is a game about the movie of the same name. Players take control of the titular character, going through abridged scenarios from the film that are translated to long levels with a ton of animation and quality to go along with it. Alongside Aladdin is another classic: The Lion King, where fans play through the same situations and scenarios from the Lion King film translated to additional abridged levels that feature a lot of exploration, collectibles, and enemies who want to deal damage

Additionally, there are multiple versions of each game, such as the console version of Aladdin, which emulates the original game. The Final Cut Version comes along with it, which is basically a remaster of the game. Consumers also get to have the Demo and Japanese versions of Aladdin as well. Also, if desired, gamers can play the Handheld versions.

The Lion King has a few less versions to share.. Gaming Instincts took a look at the Console S Version, which uses the Genesis rendition of the game that runs smoother than the previous iterations. The Game Boy and Game Boy Color versions of the game are available as well.

With all of these different versions of the game, it’s easy to see there is a plethora of history to these titles, and it is fun to compare the gameplay differences of each one, especially when going from the Game Boy to Console version. Though, actually playing these games is a different story, depending on how one utilizes the features that come with the ports.

Both games play pretty similarly and have the same type of level system, so lets go over to what Aladdin has to offer. Gamers play as a Aladdin in levels generally follows all of the story beats compared to the films. First he runs into the streets to get some apples while fighting the guards, then gets thrown into a dungeon, and eventually gets to find Genie’s lamp and have the date with Princess Jasmine. All of the levels expected are there and the translation can vary from interestingly creative and robust levels, to outright confusing and brutal levels.

For example, the first level is robust and full of different types of enemies that impede on gamers’ progress as they try to exit the level. The level is big, but is linear enough for players to figure out where to go. Luckily, the game’s visual cues work pretty well, such as trying to reach an enemy out of sight or spotting a platform on which one can jump. In later levels, such as the Dungeons, things can be outright confusing and difficult to navigate. The areas can be cramped, the enemies seem to cheat, and the stiffness of Aladdin’s jumps don’t work well in certain situations.

Despite this, the game has some of the most well-spirited animations for a film-based video game. The way Aladdin moves and jumps around is so energetic. Additionally, there are plenty of small details the game has that adds a bit more icing on the cake. If one sees a pole next to a ledge, Aladdin will grab onto it and slide down. Also, if players see an enemy with a sword and are just far enough away to hit the enemy’s sword, the swords will occasionally clash and damage the enemy while keeping the player safe. This feature is pretty unique and feels amazing for a game that came out in the ‘90s.

The Lion King basically acts the same as Aladdin in terms of story beats and gameplay, except with Simba’s moveset. Gamers start out as little baby Simba, with almost no real attacks except jumping and roaring. After some levels of jumping on top of lizards, players eventually evolve to the fully-grown lion and have a swipe attack to damage predators.

The downside is that platforming with Simba is not as smooth as Aladdin. The mechanic where he grabs ledges are mostly random and his roar is situational against enemies as Simba has to be a fairly close distance to the enemy to take effect. Additionally, the levels are, in comparison, not as intuitive as Aladdin’s. For example, in the level where Simba can’t wait to be king, he’s supposed to scare monkeys into throwing him to the next area. The problem is the level is not clear in this situation. Players will be jumping around for 20 minutes trying to figure it out.

To alleviate most of the problems with how the platforming works and how relentless the enemies can get in these levels, Disney added a rewind feature on the fly so users can make all the mistakes they want and just rewind to the previous moment. Also, gamers can choose to “watch” a playthrough of the game and, if they really want to beat the level, can use this feature to watch until the part on which they got stuck.It’s a pretty interesting feature that works pretty well, if players need a brief walkthrough on some parts.

The music is also great, as the chiptunes throughout the levels represent the songs from the movies well. Despite being one of the first confusing levels in the Lion King, the ‘Can’t Wait to be King’ level has one of the more memorable 8-bit remixes of the original song. Even more is that Aladdin’s full of energetic and strong beats that will keep listeners hoping for some more interesting tunes as they progress. Moreover, the Soundtrack area in the menu will take fans to all of the different songs in the games.

There is plenty more to do other than playing games. Players can visit the museum, where they can view game art, animations, and videos documenting the creation of these games that give insight to how Disney decided to make these games in the past. Given the quality of some of these titles, it’s amazing to see how the development went.

While the quality of these games may not be the best and have all of the same flaws that they basically had on release, the new features alleviate many of these flaws while simultaneously being frustrating to play. So much care came to making these titles compatible for the modern audience with the rewind features and multiple versions that the $29.99 price point is almost justifiable.

The Collection offers a lot to those that want to experience these games again, and will give players an insight on how these classics were made. It’s a good throwback to those who are either fans of Disney or adults who want to get a bit of nostalgia.