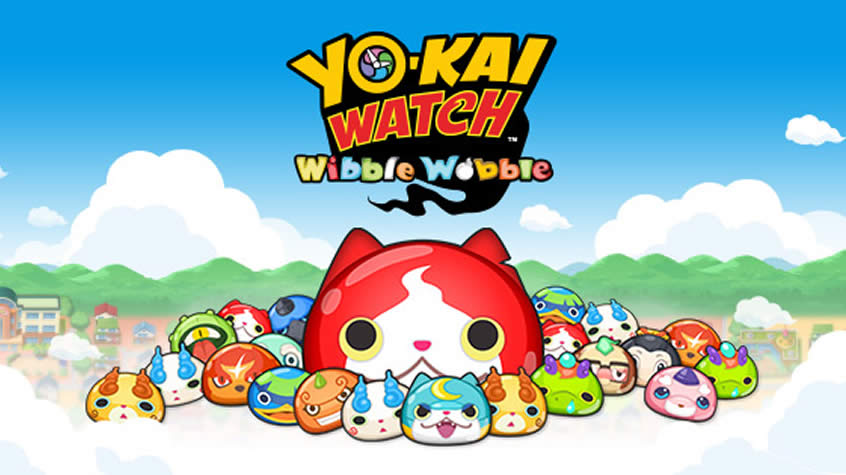 It was announced by LEVEL-5 Inc. and NHN PlayArt, that the world of YO-KAI WATCH will be soon be wobbling its way onto mobile and tablet screens across Europe and Russia. After unprecedented success in Japan, North America, Canada, and Australia – garnering over 10M downloads to date –  YO-KAI WATCH Wibble Wobble – a skillful blend of puzzle gameplay and RPG mechanics is coming to Europe and Russia on Android and iOS on 30th March 2017. Inspired by the popular TV series, the game has players fight alongside Jibanyan, Komasan, and other bite-sized fan favorites to defeat – and befriend! – dozens of Yo-kai in the world of Springdale.

Check out the trailer of Yo-Kai Watch Wibble Wobble, showcasing the games’ features:

“We’re super excited to bring this fully localized version of YO-KAI WATCH Wibble Wobble to Europe and Russia – and to be able to share the Yo-kai story with the world at large,” says Yukari Hayakawa, COO of LEVEL-5 abby. “2017 is set to be a great year for YO-KAI WATCH for Europe and Russia, as we look forward to the launch of YO-KAI WATCH Wibble Wobble, as well as as well as YO-KAI WATCH 2: Bony Spirits and YO-KAI WATCH 2: Fleshy Souls for the Nintendo 3DS family of systems on April 7th. The app has already been rated 4.5 out of 5 stars in Japan, and has amassed more than 10 million players worldwide to date. With such fun characters and entertaining gameplay, we’re confident that the localized European version will be a big hit as well.”

“The World of YO-KAI WATCH

One day, while searching for bugs in the woods, an average boy named Nate comes across a peculiar capsule machine. He opens one of the capsules and brings forth Whisper, the Yo-kai butler who gives Nate a device known as the Yo-kai Watch. Using this device, only Nate is able to identify and see various Yo-kai that are hanging around town causing mischief. Yo-kai are invisible beings and the cause of your everyday annoyances: Have you ever felt the sudden need to run to the restroom? Do your socks go missing in the dryer? How about the uncontrollable urge to reveal secrets? Chances are, a Yo-kai did it!

Joined by Jibanyan, a lazy but cute cat Yo-kai, Nate and Whisper start befriending all sorts of Yo-kai. Each time Nate befriends a Yo-kai, he receives a Yo-kai Medal as a sign of friendship. Using the medals, Nate can summon his Yo-kai friends to help him solve problems around his town of Springdale.

YO-KAI WATCH Wibble Wobble is easy to learn and hard to master. In each battle, players must swipe to connect one Wib Wob to one of the same kind, forming an even larger Wib Wob. Quick fingers are a must: connect small Wib Wob and tap on the large ones to deal damage to enemy Yo-kai (who usually attack in approximately five second intervals). The larger the player’s Wib Wob, the more damage it can deal against enemy Yo-kai. The more Wib Wob you connect, the faster the Fever Gauge will be filled . . . which kicks off Fever Mode, rendering players invincible for a brief period of time.

Occasionally, when players pop a large Wib Wob, a Bonus Ball will appear. By popping a Bonus Ball, surrounding Wib Wob will grow even larger for extra damage! Pop enough of a specific Wib Wob to fill up its Soul Meter and ready a Soultimate Move, which ranges from damage to restoring HP. Once the meter is full, players can tap on a particular Yo-kai to perform its Soultimate Move!

But defeating Yo-kai is just half the fun. After each battle, players may befriend enemy Yo-kai they have defeated. Players can even increase their chances of befriending enemy Yo-kai by giving them snacks just before battle. If players befriend multiples of the same Yo-kai, they will then earn valuable skill points. Once players have collected a select number of Yo-kai, they can summon forth an extremely powerful and useful Legendary Yo-kai!

All befriended Yo-kai can be viewed in the Yo-kai Wib Wob section of the menu, where players can arrange and strategically pick the best ones for their roster. If arranged properly, players can be awarded extra bonuses for a competitive edge. Yo-kai stats, character descriptions, and Soultimate Moves are also viewable in the Yo-kai Medallium.

Players can participate in daily, normal, and event missions for Y-Money rewards. Y-Money comes in handy in the Yo-kai Watch world and can be used to buy items, coins, and even food to treat potential Yo-kai friends. Before jumping into battle, players must spend Spirit, which regenerates over time as well. Players who want extra Y-Money and Spirit may purchase them in-game or earn them by progressing through the campaign.

Players may share their unique profile code and add friends who they can send Spirit to daily. It’s also possible to challenge friends for the top spot in the YO-KAI WATCH Wibble Wobble leaderboards.

Another unique feature to YO-KAI WATCH Wibble Wobble is that players can save up to 3 different profiles onto one device. This means that families sharing a single device can still have separate save files for multiple YO-KAI WATCH fans. This way Mom, Dad, and a little one can play through the game at their own pace without missing out on anything, and compete with each other for high scores!”