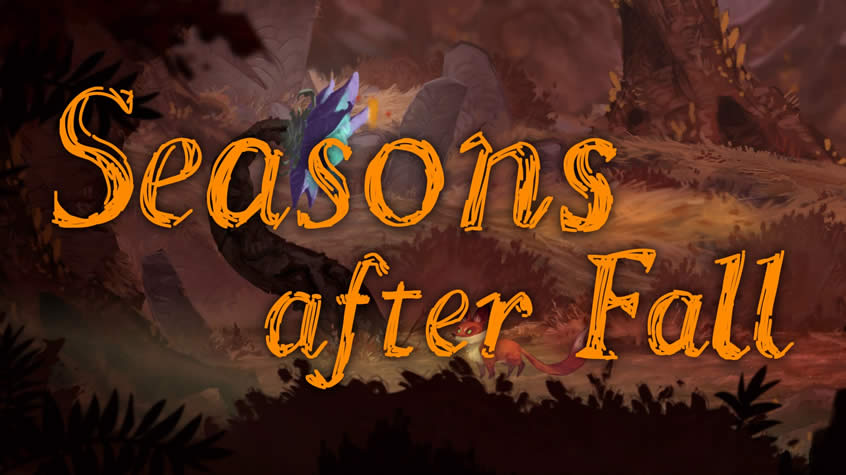 It was announced by Swing Swing Submarine, that their puzzle-adventure game Seasons after Fall is available now on PlayStation 4 and Xbox One! Following its warm reception from players and critics alike on PC, this hand-drawn adventure is ready to enchant a whole new audience on consoles.

Check out the launch trailer of Seasons After Fall, featuring some gameplay footage:

“Dive into an enthralling world governed by nature and magic. Travel to the heart of a mystical forest as a wild Fox, manipulating the gorgeous environments around you by changing seasons at will. Further adding to the bewitching atmosphere, you are accompanied throughout your journey by the enchanting sounds of a live string quartet.

Winter freezes lakes and waterfalls, while Summer allows plants to grow and open up new paths. Fall brings mushrooms to bloom, and Spring raises water levels with rain. Dynamically switching between seasons offers a fresh, ever-changing aesthetic and unique ways to explore the forest – the power of nature is in your paws!

Each of the seasons drastically alter the environment: it is up to you to change the world and open new paths. The world of Seasons After Fall is overflowing with secrets – can you discover them all?

Seasons after Fall is available to download now on PlayStation 4 and Xbox One! The game is already available on PC.

In Seasons after Fall from Swing Swing Submarine, you are a wild fox embarked upon a perilous adventure, with mystical powers that allow you to manipulate the life of the forest through dynamically changing the seasons; powers that open new pathways and opportunities throughout the game-world depending on the chosen season. Seasons After Fall encourages the player to explore a gorgeous 2D graphical world, accompanied by an enchanting soundtrack recorded with a live string quartet. Travel in search of the Four Guardians to reunite the scattered Seasons and restore order in the Forest. Summon Winter to freeze a waterfall to pass, or call for Spring to make plants and ﬂowers bloom, guiding you to previously inaccessible zones. Travel across forests, rivers and caves, and manipulate an ecosystem that is as uncanny as it is marvelous to unveil the secrets of this world.

Swing Swing Submarine is a small team of developers who hang out together on the same boat, creating games and interactive experiences for the world to enjoy. After having released ‘Blocks That Matter’ and its sequel ‘Tetrobot and Co.’, two smart puzzle games linked by their universe and mechanics, Swing Swing Submarine released ‘Seasons after Fall’ in 2016, a platform/adventure game about exploration, seasons and foxes with unusual powers.”

For more information on Seasons After Fall, visit its official website.