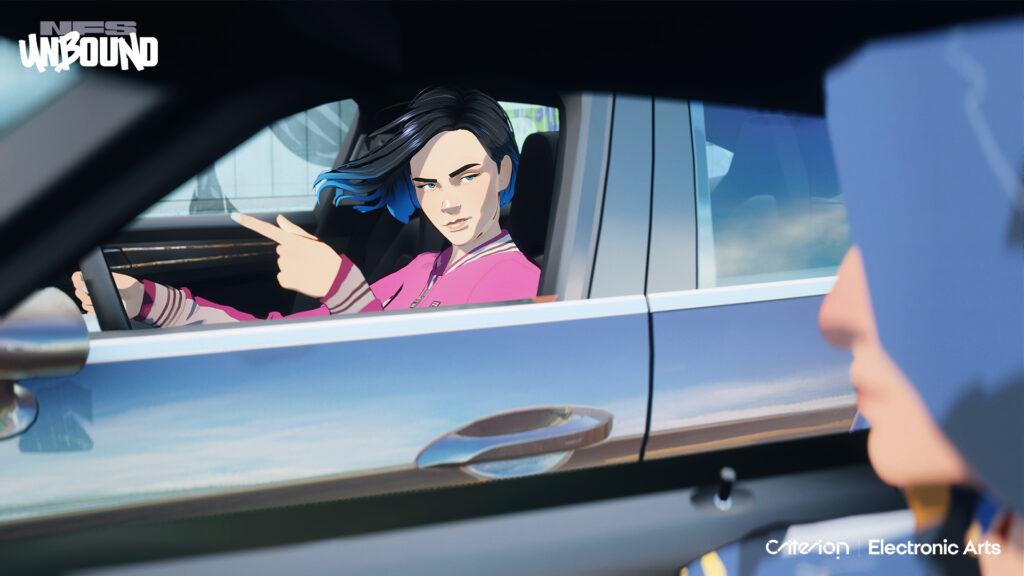 Need for Speed Unbound Review – This is Cringe Bruh

Disclaimer – This product is being reviewed on PS5. A review copy was provided by EA for the purpose of this review. Gaming Instincts is an Amazon Affiliate and does gain financial benefits if you choose to purchase this product on this page.

The Need for Speed franchise has had a bit of a slump over the last few years. EA has decided to take a step back from releasing a fresh title every so often. Instead, they decided to take a bit more time than usual to release a new entry in the series. Surprisingly, Need for Speed Unbound is only available on new-generation platforms which was not something I expected from EA considering the popularity of the IP.

The last game was released in 2019 which was titled Need for Speed: Heat and it was reviewed well for the most part. Fast forward three years and a new entry has finally arrived. So what’s new with the latest entry in the ever-popular racing franchise? Can it compete with the Forza Horizon series? Does it do anything innovative and creative? And with it being exclusively on new generation systems such as the PS5 and Xbox Series X, does it have any advantages over other racing games that are cross-gen? The short answer is a big fat no, but let’s get into the long answer and explain why. Welcome to our review of Need for Speed Unbound.

The first big difference you’ll notice is the style and presentation. It has this weird cell-shaded effect when you use a boost or drift corners. Although I applaud Criterion for trying something different, I do not think it’s that remarkable, although others might like it. It is a subjective matter when it comes to the game’s stylization.

I will say, however, that the overall feel of the fake Chicago city, Lakeshore, is not very enjoyable. It feels empty and lifeless. But perhaps that has more to do with art direction than anything else. The game runs very well and performs well, so I have no complaints on that end. The most annoying part of the game’s presentation though is its forced characters. It’s clear from the beginning that Need for Speed Unbound is trying to cater to a specific type of audience instead of the wider consumer.

Before you begin the game, you have to customize your character, and the choices that they give you are not very helpful. The character designs are absolutely awful and the game forces you to choose from ugly presets. Why can’t you just choose a generic character model and then easily customize it from there? The weird decision feels extremely forced and unnecessary for a racing game. Yes, you can customize it, but the customization is quite confusing and you can’t tell what gender the person is based on their facial models and looks. 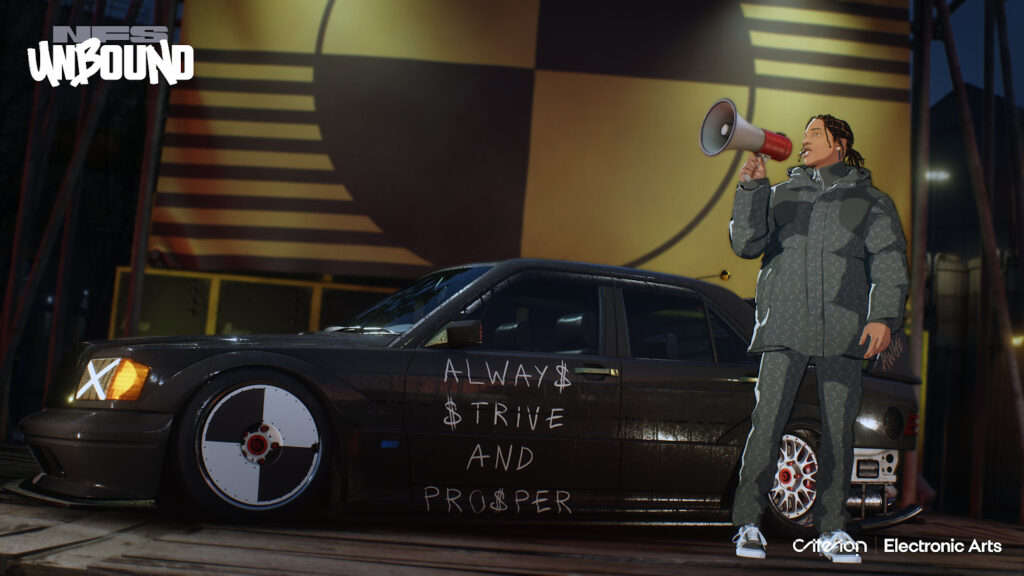 This is a racing game to begin with. Why is there a story or some sort of plotline in a game where you have to drive at high speeds in the first place? Forza Horizon 5 had a so-called “plotline” too and though annoying, it wasn’t as forced as this.

As far as the story and dialogue are concerned, it’s absolutely god-awful. When I am playing and driving at fast speeds in a racing game, the last thing I want to hear are two obnoxious idiots with annoying voices talking over the car’s engine or the awesome soundtrack. Dialogue should never happen in a racing game while the player controls the car. It will take them out of the immersion and make them feel like they are playing a different type of genre. This is not GTA or Saints Row where you are driving your AI buddies to the next mission objective and where dialogue actually matters. This is a racing game first and foremost, and it should be focused on that.

In business, companies want to receive money from every type of person. Unfortunately, it’s not possible to do that. Therefore, the most effective strategy would be to design a game that caters to your biggest fans. This is in contrast to the crowd who do not care about video games at all.

The gameplay in Need for Speed Unbound is not that horrible, but it’s not very enjoyable either. To be quite frank, the last good Need for Speed title I played was Need for Speed Rivals. It felt like the original game where you race against other cars and evade the police. But what made Rivals fun was that you could also function as the police and chase after the races. This is what the Need for Speed franchise is known for. Instead, Criterion and EA thought it would be wise to chop off a core part of the series’ DNA, playing as the cops. How can anyone on the development team think this is a smart idea?

Imagine if someone at Sony Santa Monica decided to tone down the violence in the next God of War title. Violence and gore are a core part of the franchise’s DNA. What if the puzzles were completely removed in the next big Zelda game after Tears of the Kingdom? Yep, taking out the ability to play as the cops in Need for Speed Unbound was literally the dumbest thing anyone could have come up with. You’ll only ever encounter police when you are trying to escape them or take them down. 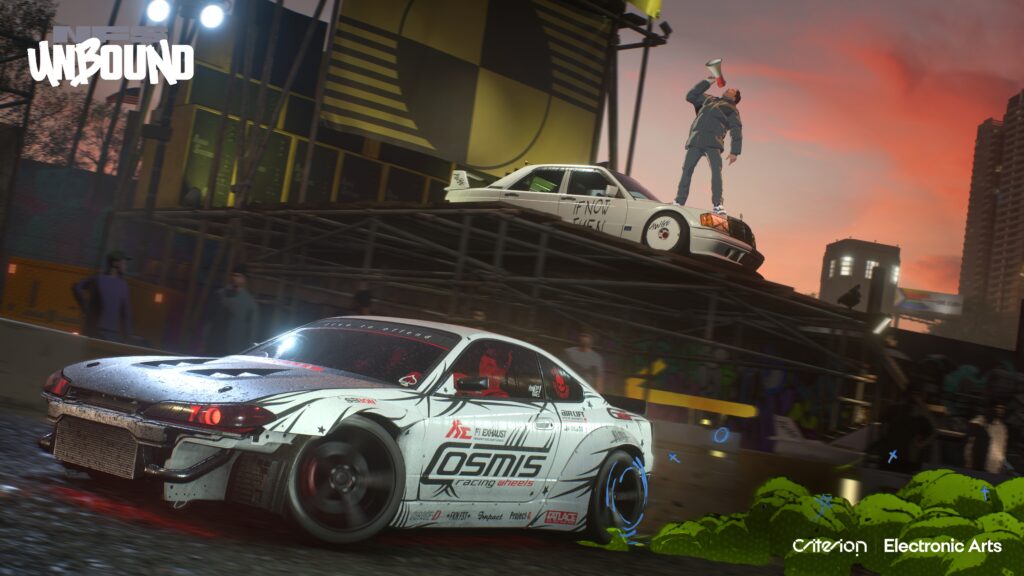 The racing itself is not bad and can feel decent at times. The sense of speed is quite enjoyable. I will say though I am not the biggest fan of how boosting works in this game. It’s a bit strange and at times clunky. Maybe I am just not skilled at the game, but I will admit I was playing on regular difficulty and it was posing quite a challenge. It was difficult to get first place most of the time. However, I never had issues getting first place in Forza Horizon 5. That game’s handling and drifting are way different from this game. I personally did not like how the handling felt, but others may feel differently.

Then there are your usual collectibles like Billboards, Bears, Street Art, Speed Runs, Drift Zones, and more to collect. If you’ve played previous NFS titles then you know what to expect when it comes to 100 percenting the game. What is helpful though is that your collectible progress is shared offline and online, so you don’t have to worry about losing progress if you lose internet connection.

If there is one redeeming quality about Need for Speed Unbound, it’s the awesome soundtrack. Although I hadn’t heard many of these artists before, the music itself suits the game and makes it more enjoyable. But, as I’ve previously said, the music gets faded into the background when the characters start talking to each other, which ruins the experience when I am trying to race. So I started waiting for them to shut up before starting the race. This should never be allowed to happen though. If a catchy song is on, why should I be forced to not listen to it and race to it? Extremely dumb.

I commend EA for trying something different with Need for Speed Unbound, but, sadly, this ain’t it chief. First and foremost, give the racing itself the number 1 priority. No one is willing to give a crap if your racing mechanics are not as fun as they could be and core parts of the game are missing such as the ability to play as a cop. Make a good racing game first, then focus on the presentation. Stop trying to create storylines for a racing game. Creating a whole plotline is a waste of development time and budget. Oh and hire new writers as well, because the game contains awful vomit-inducing cringe dialogue. Need for Speed Unbound will get a 6 out of 10. This is extremely disappointing. Criterion used to be a god-tier arcade racer developer but it seems that either the original staff has left the building or they are simply not adept at making racing games anymore.

The game can be somewhat fun if you can put aside the god-awful story, cringe dialogue and a boring presentation

Very subjective, you either like the art-style or not. Runs extremely well though and performs good too.

Fantastic soundtrack that’s a joy to ride too

Typical Need for Speed collectathon, if you enjoy that you’ll like it. If you can stomach the awful characters and writing that is.