ESRB – E for Everyone

Disclaimer –  This product is being reviewed on the Xbox Series X. A review copy was provided by Thunderful for the purpose of this review. Gaming Instincts is an Amazon Affiliate and does gain financial benefits if you choose to purchase this product on this page.

A brand new LEGO adventure is finally here, and, this time around, it’s not another movie license tie-in. LEGO Bricktales is a full-fledged LEGO game with its own story, unique mechanics, and universe. If you are thinking this is another game where you walk around as a LEGO character and try to collect a bunch of bricks with your co-op partner and build things with a single press of a button, then you will be in for a surprise. Instead, LEGO Bricktales focuses purely on puzzle solving, brain-teasing, and a little bit of exploration for most of its playtime. Is it well executed and, most importantly, fun? Let’s find out. Welcome to our review of LEGO Bricktales.

The Premise and Puzzle Solving Gameplay

Your grandfather is a genius in dire need of your help. You are tasked with repairing the land and everything around it because if you don’t, then the mayor will shut down your grandfather’s amusement park and take the land for himself. Across your adventures in LEGO Bricktales, you will come across several diorama biomes such as the Jungle, Desert, and Medieval Castle. Each biome has different characters you need to meet and rescue to progress through the story. You will also find hidden pathways that lead to secret areas that may include treasure chests or animals to save. While all this is optional, it does add substance to the overall gameplay, especially, for those who enjoy hunting achievements and 100 percent completion.

The core gameplay mechanic in LEGO Bricktales is brick-by-brick puzzle solving. When you buy a LEGO set in real life, it usually comes with a manual that tells you what brick to use, when to use it, and where to use it. Think of LEGO Bricktales in the same way but in a digital virtual world without the manual or any kind of guidance. Throughout your journey, you will be tasked with building things to proceed to the next section in the diorama.

The puzzles themselves are super simple at the beginning, but the difficulty curve ramps up as you continue throughout the game. For example, in one section, I was tasked with building a bridge to get across the jungle level. While in another, I had to build a staircase. Later on, the puzzles get a lot more complex and ask you to build a helicopter that requires balanced weight so it won’t fall.

Believe it or not, even some of the earlier puzzles had me stuck for at least an hour, if not more. LEGO Bricktales is a real brain teaser, if you are not into puzzle-solving or brain-teasing, then I do not think you will enjoy the game. I do not mind solving puzzles and cracking the code. What I do mind, however, is when the controls feel extremely clunky. Because LEGO Bricktales is a 3D game with the XYZ axis, it can become a real pain when using a controller to properly navigate the 3D space while also trying to align the bricks.

I like the puzzles in this game, but unfortunately, I was spending more time fighting the controller and trying to place bricks in the correct spot instead of solving the puzzle itself. This annoyed me and was turning me off from the game, even though I was satisfied once the puzzle was solved. When you do find the proper solution, it feels extremely satisfying to move on to the next area of the game and continue exploring. The exploring itself is also quite fun. The levels are well-designed.

The world of LEGO Bricktales is beautiful – the game looks great on the Xbox Series X, and there is not much else that could make it look better. It runs super well without any stutters or weird graphical hiccups. The bricks themselves are highly detailed, and the diorama biome-themed levels look fantastic as well. The music, however, really got on my nerves. When I was stuck on a puzzle for an hour or so in the jungle biome, the same music would play on a loop. So for the entire hour, while I was getting frustrated with the clunky controls, I kept hearing the same beats and noises, which was getting on my nerves to the point where I had to turn off the music completely. 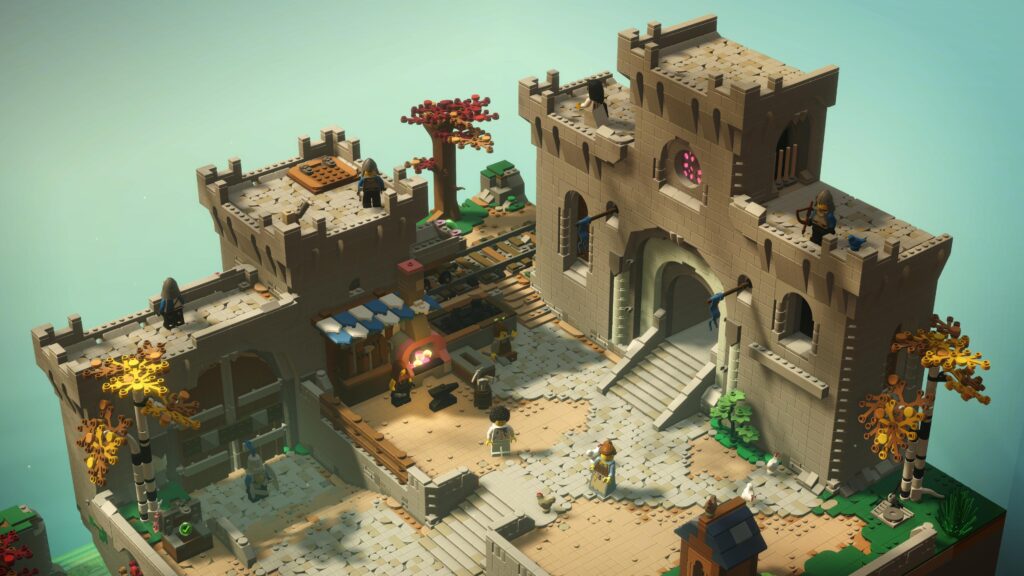 I am not sure why the developers couldn’t have at least made several short tracks that would cycle throughout the puzzle-solving portion of the game. Instead, the player is forced to listen to the same thing forever and ever. As far as the sound effects go, those were fine and fitting, and I didn’t encounter any weird audio bugs or clipping. Overall, LEGO Bricktales is a solid-looking game with a lackluster soundtrack that can get quite repetitive.

LEGO Bricktales is a decent game with cool ideas hampered by atrocious navigational controls during the puzzle-solving and annoying music. The game, at its core, is a puzzle-solving game with brick-by-brick mechanics in beautiful LEGO worlds. The puzzles are creative, challenging, and fun to solve. The visuals are a joy to look at, however, your ears might need some cleansing from all the repetitive music you will hear for hours.

My biggest issue with LEGO Bricktales is that playing it with a controller is a major hindrance. You will be spending more time fighting the clunky controls and navigation than trying to solve the puzzle. My recommendation is that you play this game on the PC instead of the Xbox due to the controls. The analog sticks just do not work in a full 3D space when it comes to navigating a cursor. Overall, LEGO Bricktales is a great game that’s different from the most recently released LEGO-themed games. Just make sure to turn off the music when you start solving puzzles and get ready to destroy your analog stick. With that being said, LEGO Bricktales will be receiving a final verdict of 7.5 out of 10.

Sound effects are fine, but the reptetive music during the puzzle solving is not

Decent amount of content for completionist, but nothing too crazy once you find and collect everything