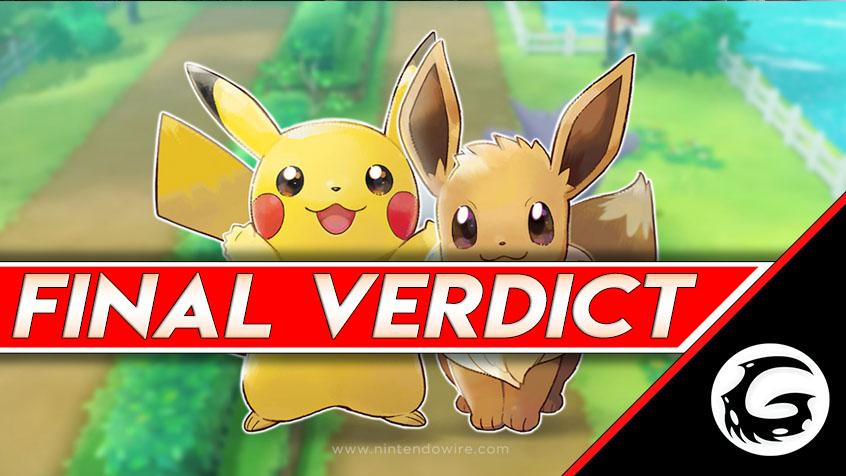 Publisher: The Pokemon Company and Nintendo

When the announcement of the Pokemon Let’s Go games came, a collective nostalgic scream of happiness was heard throughout the internet. Then, the excitement quickly turned to a dull groan when it was announced that this would not be a mainline RPG Pokemon game like many had been hoping for, but a game that combined the classic Pokemon Yellow story line with the mechanics of the Pokemon Go mobile game. While the reasoning behind the change was clearly stated as a way to get a new generation of kids into the Pokemon franchise, the hardcore fan base of twenty-two years felt let down by the first game coming to a new console being a watered down version. Let’s take a look at Pokemon Let’s Go, Eevee! and see how the changes have affected the latest edition to the franchise.

The story of Pokemon Let’s Go is essentially a carbon copy of the Pokemon Yellow story line, as well as Pokemon games of all generations. Your character starts off heading out to go on their first Pokemon adventure. To the surprise of you and Professor Oak, the first Pokemon that you encounter (Pikachu or Eevee) seems very temperamental about staying in its Pokeball, and chooses to wander around beside the player or on the player’s shoulder. You then set off to challenge the eight gyms in the Kanto region, defeating the gym leaders, and obtaining badges to eventually challenge the Elite Four and become the regional champion. Along the way, players will battle Team Rocket, an evil organization bent on stealing the Pokemon of trainers (for reasons that still haven’t been fully explained). 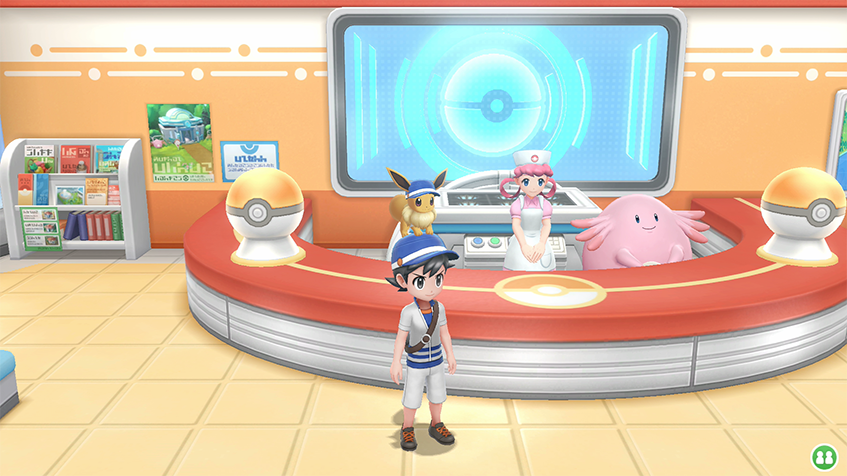 While the story is a total rehash of what we have seen over and over again, there is a nod to past players with the appearances of Red, Blue, and Green, the main characters of generation one. This minor change is a fun nostalgic plot as well as an interesting way to acknowledge how far the franchise has come since its inception in 1996.

The gameplay in Pokemon Let’s Go is by far the biggest change from its predecessors. Let’s start with looking at the similarities. There are still trainer-on-trainer battles in the game that players will come across along the routes between the various cities as well as within the gyms. The turn-based combat is still the same with the rock, paper, scissors style fighting between the various types of Pokemon. Players will have a party of six Pokemon that they have with them at all times and level them up by battling and catching Pokemon in the wild.

This is where the similarities begin to fall off for the gameplay. In past Pokemon games, players would have to run around in the tall grass areas until a random encounter occurred and a battle would begin. In Let’s Go, wild Pokemon can be seen in the overworld, and players can begin an encounter with them by walking into them. Instead of battling the wild Pokemon to weaken them before catching them, the game implements the Pokemon Go method where players will have a ball ready, and they can just throw them until the Pokemon is either caught or runs away. There is a ring around the monster that will go up and down in size and be color-coded from green to red, indicating the difficulty of the catch with the currently-equipped ball. The closer that players can hit to the center of the circle, while it decreases in size, will give a bonus percentage chance to a successful catch. There are also berries available to throw at the wild Pokemon to make them easier to capture or slow them down for easier throws. 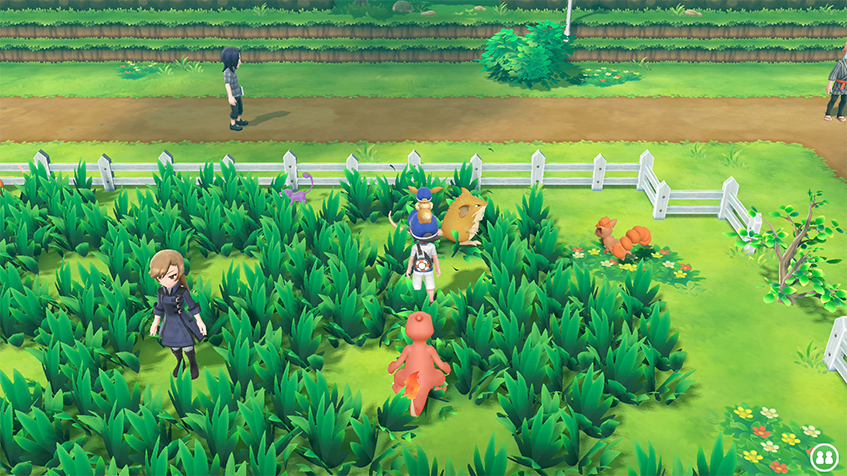 This new method of catching uses the motion controls of the Joy Con controllers for the Switch. This gimmick does make it so that players cannot use a pro controller or the Joy Con grip that comes with the console. While this is not much of a problem while playing on a TV or monitor of some kind, it can be frustrating when playing in handheld mode. If the controllers are connected to the Switch itself, players will have to move the console around to follow the Pokemon and line up a shot to throw a ball by pressing the A button. The game definitely favors using the Joy Cons unattached, with motion controls to play. 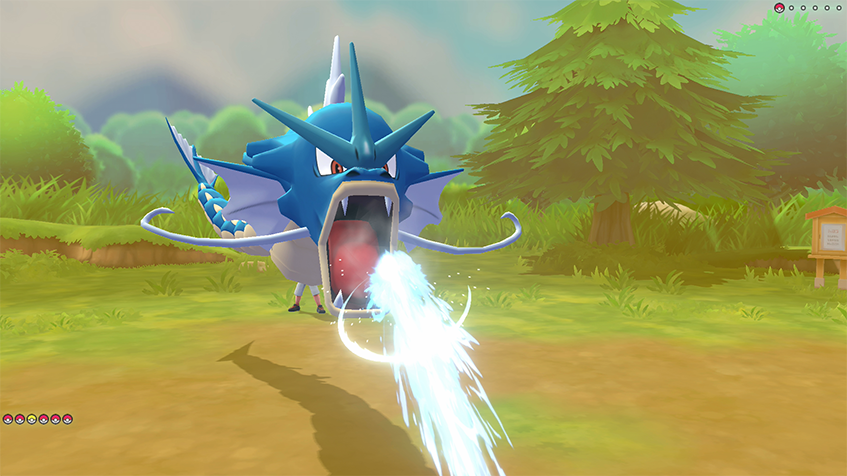 One of the most interesting features of the game that we have not seen since Pokemon Heart Gold and Soul Silver is the following mechanic where players can select a certain Pokemon in their party and have them taken out of the ball to tag behind in the over world. This small feature adds a lot of character to the game, and digs into the nostalgia of seeing the original Pokemon fully formed in 3D. Some Pokemon that are too large to follow the character on-screen can be ridden such as Onix or Gyarados. All the character models and animations look fantastic, which will make any Pokemon fan smile.

The cartoonish graphic style for Pokemon Let’s Go works incredibly well for the series. It looks crisp playing both in handheld mode and in 1080 on a TV or monitor. Each Pokemon model, both in battle and in the overworld when following, have their own unique animations that give them personality beyond their combat moves. The 3D battling spaces also immerse the player into the game, fully realizing the size differences between different Pokemon. Having a Gyarados in battle taking up a massive space while fighting a smaller Pokemon like Rattata or Pidgey never seems to get old. 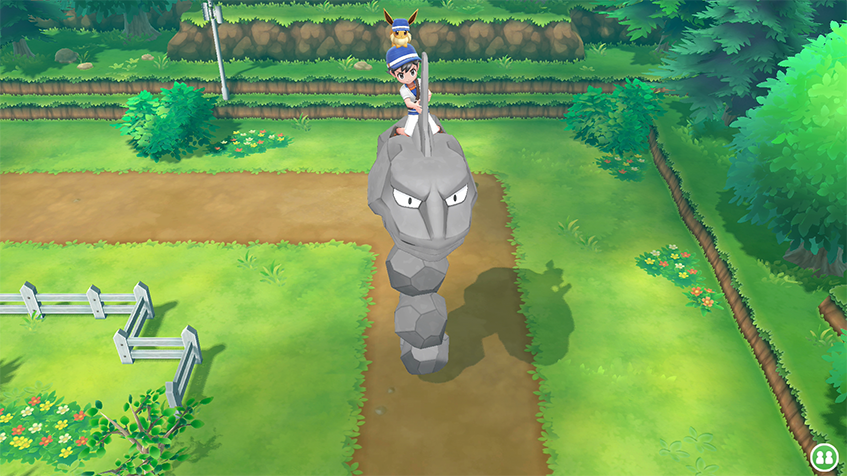 While in handheld mode, there are moments where tiny amounts of lag can be detected if there are too many wild pokemon on the screen at once or a massive amount of particle effects in battle, but this happens so little that it never causes any issues in game. When playing in docked mode, the immersion of Pokemon is brought to a whole new level. For players who have been wandering these maps for years, it is a wonderful depiction of a well-known world in a whole new light, and for new players, it will set the bar for any upcoming Pokemon titles in the future.

Pokemon Let’s Go is an absolute joy for fans who have been waiting for a non-handheld version of the Pokemon series for years and absolutely scratches that itch while we wait for the next mainline game in the franchise to release. However, we have seen this exact same game three times now, and while the catching mechanic is fun and utilizes the gimmick of the Joy Con controllers well, after a while it just seems to cheapen the experience altogether. Players will rarely find any use for their party Pokemon outside of trainer battles. The experience that is given to all the Pokemon in the player’s party, for both defeating trainers and catching Pokemon, raises the levels so quickly. Half of the party will never see the light of day outside of being let out to follow the player around. 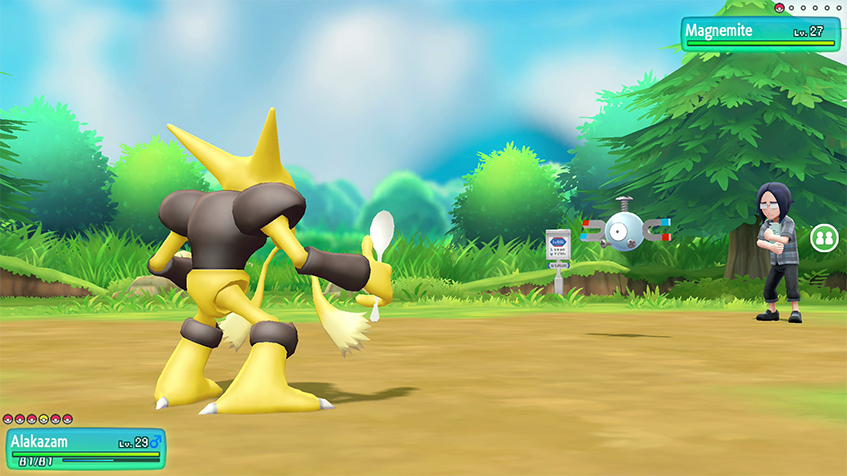 Also, we have to talk about the price. Of course, because this is a Pokemon game that’s close enough to a mainline RPG for the franchise, Game Freak and Nintendo can charge almost whatever they want for it and find an audience that will buy it, which is unfortunate for consumers due to this game not being worth the 60 dollar price tag. Like previously stated, we have played this game over and over again, and while the nostalgia factor is a big seller for past players, at the end of the day it’s just a reskinned and simplified version of generation one. Once the nostalgic veil lifts and the catching mechanic gets old after a couple of hours, it falls short of what we all really expect from the Pokemon Franchise. Our final verdict for the Pokemon Let’s Go games is a 7 out of 10. 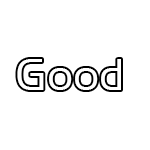