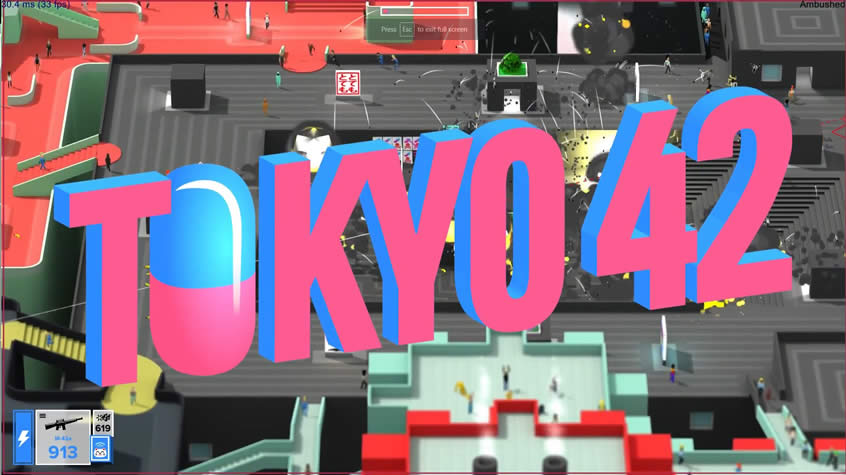 Mode 7 announced the release of Tokyo 42: Behind the Scenes, the first Mode 7 mini-documentary about the development of SMAC Games colourful cyberpunk actionfest that is Tokyo 42. This film gives an insight into developers Sean and Maciek’s creative process, their relationship with Mode 7 as a publisher and shows off some big new plans for the single player game.

Check out the mini-documentary made by Mode 7 about Tokyo 42, featuring a behind the scenes video about the development of the game:

“Get a unique look behind-the-scenes of one of this year’s most exciting
indie games, if we do say so ourselves…which we do, as it happens.
See some brand new single player areas as well as some new weapons, plus hear from the developers themselves…

Tokyo 42 is an action title inspired by classics like Syndicate and GTA1.  It’s viewed from an isometric perspective but the camera can be rotated to reveal every facet of its intricately designed open-world.

Bullet physics, jumping with air control, sneaky stealth and crowd simulation all play a role in this ultra-colourful kinetic frenzy.

You’re a budding freelance assassin in a world where sinister forces are at play, taking on missions to pay your way and becoming embroiled in all sorts of cyber-shenanigans.  There are also cats.

A multiplayer arena mode blends adds a Where’s Wally-slash-Waldo-for-other-territories dimension: change your skin and blend in with the crowd, then explode into view with a flurry of overly ambitious rockets.

Mode 7 was founded in 2005 by Joint Managing Directors Paul Kilduff-Taylor and Ian Hardingham. We are a core team of four, and are backed up by a group of trusted freelancers.

In 2007, we released our debut title Determinance, a multiplayer PC sword-fighting game.

This achieved a worldwide retail release, received the 2007 Game of the Year Innovation Award from Gametunnel.com, was released by Novint Technologies as “The Feel of Steel”, and led to several other projects.”

For more information on Tokyo 42, visit its official website.