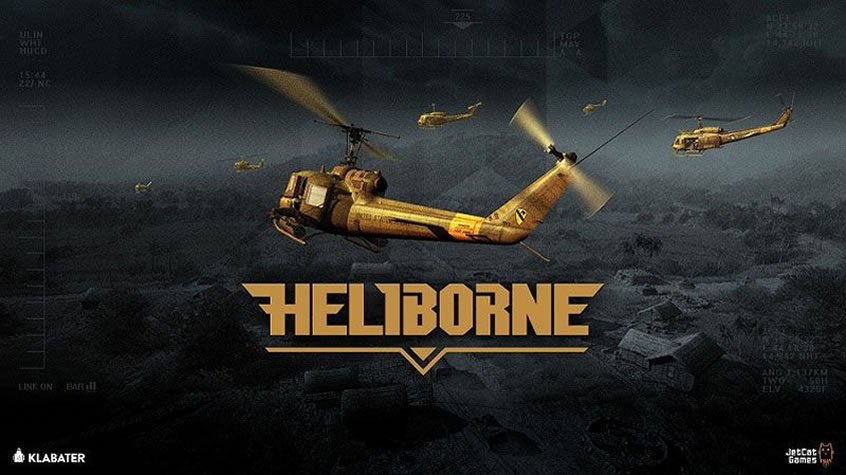 Heliborne Is Coming for OC on October 12th

Heliborne Is Coming for OC on October 12th

Klabater and JetCat Games announced the launch date of Heliborne! The game will leave Early Access on Steam and flaunt it’s new features as a full release on October 12th priced at 24.99 USD. The publisher and developer will provide continuous support for the game after launch, consisting of free patches and paid DLC. Steam Workshop has also been implemented in the game, allowing players to unleash their creativity and customize their machines.

Check out the launch trailer of Heliborne, showcasing the games’ features:

“Jump in and fly co-operative historical missions, multiplayer battles, and single-player campaigns – all spread over different theatres of war, including Vietnam, Afghanistan, and Kosovo.

Heliborne is a helicopter combat game created by JetCat Games and published by Klabater, where players fly co-operative and competitive online missions set in historical conflicts, from the Vietnam War to the war in Kosovo in 1998. Soon everyone will be able to take the controls of accurate renderings of real-life helicopters, and take part in joint operations between air and ground forces.

Heliborne offers a great balance between arcade and simulation flight models. During development the creators sought help from an expert, Major Mackevich Valery Genrihovich, a graduate of the top air force school in Russia, with whom they discussed military aspects of the game, including the flight model and helicopter combat tactics.

Major Mackevich Valery Genrihovich is a graduate of Syzran Zhukovsky’s and Gagarin’s Higher Military Aviation Academy. He flew Mi-2 and Mi-24 helicopters and completed theory training for the Ka-27 helicopter. Before ending his military career he was chief instructor-researcher of the Mi-24 helicopter at the Army Aviation Center, training pilots in the Moscow Military District.  He is the recipient of the Order of Courage – awarded for selfless acts of courage and valor. He also participated in the planning of military operations with helicopter usage.”

“Pilots are people marked by the sky, and their squadrons are big, close-knit families united in this dangerous profession, where everyone has to simultaneously do their job well and have utter confidence in their fellow pilots.

I’d like to see more young people willing to train to become professional pilots. Not long ago even small towns had flight clubs, where boys and girls could learn to fly a glider, a helicopter, or a plane in their free time. They were common back then, but now most of them have disappeared. I hope that games like Heliborne will help to foster a new wave of enthusiasts. Those who will also be marked by the sky, even if it requires great willpower and a lot of training.

If you look at the advice I gave to the Heliborne development team, it wasn’t just about how to create more realistic gameplay, but also how to make the process of flying more exciting. I’d like more people to feel the excitement of controlling such powerful machines, and the beauty of flying together in these realistically depicted helicopters.”

For more information on Heliborne, visit its Steam page.