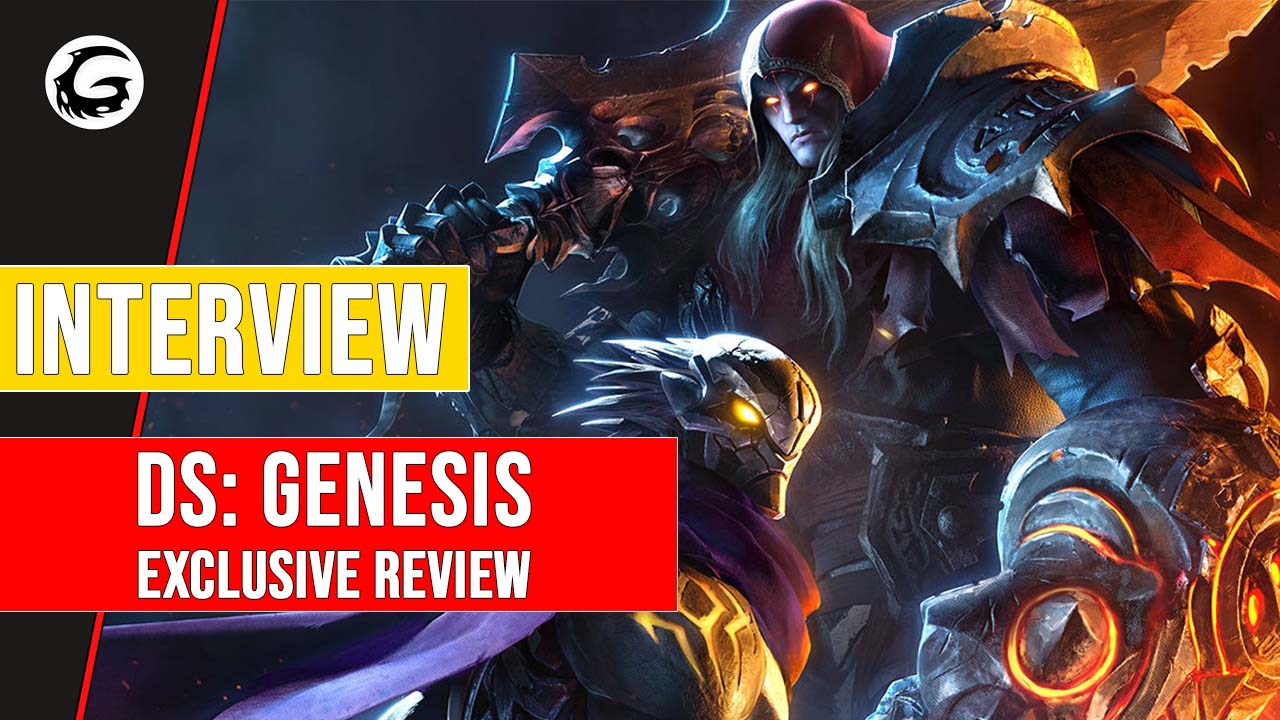 We are happy to bring you an exclusive interview with Joe Madureira to talk about Darksiders: Genesis.

Leonid Melikhov: Hey guys, welcome to Gaming Instincts, today we are going to be talking about Darksiders: Genesis with…

Joe Madureira: So Darksiders Genesis is the fourth game in the series, but it is actually not Darksiders 4, it takes place hundreds of years before the events of Darksiders one. It’s really a good introduction to people that maybe have not played any of the Darksiders games that can jump in with no prior knowledge of the series. If you have played the other ones though, it’s really cool because there’s a lot of returning characters that you’ll meet for the the first time here. It definitely ties into the core Darksiders games that are out. So the big thing about this game is that it introduces Strife, who is the fourth playable horseman, he hasn’t been playable before. It brings back War from the first game and for the first time ever, it’s multiplayer co-op for the full game. A lot of people ask, “can you play all four horsemen?” well you can’t. It’s just War and Strife.

Leonid Melikhov: Any reason why? What was the main reason why you couldn’t.

Leonid Melikhov: Oh yeah that makes sense because you have to count the abilities to help with the stats and the damage numbers. That’s a lot of work.

Joe Madureira: Yeah, obviously that’s like the dream. Everyone is always like, “it’s gotta be the four.”

Leonid Melikhov: For the sequel, maybe. Who knows?

Joe Madureira: This is a good starting point for us.

Leonid Melikhov: I think you guys did the right thing with choosing War because War is kind of the beginning. You always want to play that original person. Strife is also something also new that fans of the old series wanted to play and it was really crazy. I remember back years ago, Darksiders came out for on the PS3 and Xbox 360 back in the day. So it’s a pretty old franchise I guess you can say in today’s standards and I remembered that I played the first game and I was like, “Oh this is a really cool game,” then I slowly started getting into it and I really loved it. Then I heard that the second one was coming out and I platinumed the first game, I got every trophy.

Leonid Melikhov: Then the second one came out. This time I was Death and it was a very different game in a sense of like, it had loot in it. The community was a bit divisive. The community that liked Darksiders 1 because it was more action-based and people liked Darksiders 2 more because it was more of a looter. So there was this weird thing going on and people always argue about which one is better. I like them both for different reasons but if I had to pick which one I liked more, it’s probably the first one because it was the original. Nostalgia is a really strong drug. So then I really wanted to play the third game. The third game came out last year, I didn’t get a chance to play it yet, but I heard that it was compared to Dark Souls. Now you guys came out with this and I was very surprised about the top down view and my first impression was, “Is this Diablo now?”

Joe Madureira: It’s not and despite the isometric camera, it really does play more like the first Darksiders. War has all of his original moveset and he feels like War. Strife is like a twin-stick shooter on top of that, but there’s still traversal, there’s still puzzles and tons of combat.

Leonid Melikhov: Were you guys scared of making this a top-down game with the fan’s reception?

Joe Madureira: We were a little worried about that just because players all just have their own expectations and anything you do that isn’t from the original game is gonna upset somebody. For us, we just knew that this is a game that we can do well and then we just took a chance on it.

Joe Madureira: So far honestly, everyone has enjoyed it and nobody has really complained about the camera.

Leonid Melikhov: Can you zoom in the camera, closer and further away or is it fixed?

Joe Madureira: You can. It’s mostly fixed, although there are some dyanmic camera shifts that happen, but we control that not the player.

Leonid Melikhov: Is it a game that’s gonna come out, charge your price for it and that’s it? Then there’s DLC, games as a service? Are you planning on making updates?

Leonid Melikhov: A straight purchase then you’re done? There’s not gonna be any new updates, new content at all?

Joe Madureira: As of right now there aren’t any definite plans so I can’t really say, but obviously if the game blows up and does really well then that demand is gonna be there.

Leonid Melikhov: Right, because people are gonna ask you to add new horsemen, but who knows, anything can happen. So how long do you guys think the storyline is gonna be from beginning to end?

Joe Madureira: If you were like blowing through it, you can probably beat it in like 10 hours. I think that there’s a few more hours of stuff if you’re completionist with three difficulty levels, and there’s an arena so that’s something that people are going to be farming a lot.

Leonid Melikhov: When you say arena, do you mean like a boss rush mode?

Joe Madureira: It’s something that we’re gonna talk about soon but one of the things that drops in the game are creature cores, which are a random drop off of creatures and you actually use it to level up your abilities. If you kill certain creature types, you’ll be able to equip the creature core in a slot. We’re going to reveal the skill tree soon but it’ll give you different effects so you might take reduced fire damage from having a lava core. As you get 20, or 50, or 100, you can actually stack them to level up the effects so the cool thing about the arena mode is that it’s a guaranteed way to fight tons of enemies.

Leonid Melikhov: Just have fun with the combat system?

Joe Madureira: Nothing you do is ever wasted because even if you’re doing an area you’ve already been through and kill creatures you’ve killed a million times, you’re still getting creature core upgrades and it keeps everything fresh so I think it is gonna end up being more like 15 hours but I guess we’ll see.

Leonid Melikhov: I see, so for the main progression of the game, does leveling take a while as well?

Joe Madureira: The characters don’t level, they just upgrade their abilities. You’re health, when you collect health shards, you start turning in more health and get more upgrades.

Joe Madureira: And like in Darksiders one as well.

Leonid Melikhov: And like in Devil May Cry and those are very traditional third-person action games. It’s the same thing but this one’s just top-down.

Joe Madureira: It’s also just fun to see things explode and fall all over the ground and pick it up.

Joe Madureira: The game was developed in Unreal, then the challenge I think for us was that we came from doing traditional hand-painted style and battle chasers to.

Joe Madureira: 3D, normals, advanced lighting like that. So we’ve been playing with Unreal for the last year and a half and just tweaking to really get the stylized art that we’re going for.

Leonid Melikhov: I think it came out pretty well.

Joe Madureira: Thank you, we’ve been getting a lot of compliments, we have an amazing art team.

Leonid Melikhov: I can tell, it reminds me a lot of Blizzard. It’s good because Blizzard Artists were always looked upon highly.

Joe Madureira: We’re huge fans of Blizzard and we have a lot of friends over there so we’re definitely influenced by those guys. They’re some of the best in the industry.

Leonid Melikhov: Can you tell us about the music?

Joe Madureira: Yes. We were very fortunate to get Gareth Coker on here, he’s the composer of Ori and the Blind forest. We’re big fans of his an we’re exited that he was into doing it.

Leonid Melikhov: What made him join the team?

Joe Madureira: I emailed him and said, “Hey, I love your music on Ori and the Blind Forest,” and he was like let’s talk. I showed him a little about the project.

Leonid Melikhov: And he’s totally down.

Joe Madureira: Right on board. It’s funny because I had been listening to his stuff on Spotify that I didn’t even know he did. He did Minecraft and stuff and I thought that this guy was good. Luckily when I reached out to him, he had the time and was interested in it. So it’s cool.

Leonid Melikhov: So what are we looking for Xbox One, Xbox One X, PS4, PS4 Pro. Any differences, are you going for HDR? Dynamic resolution?

Joe Madureira: Honestly a lot of that stuff is gonna be optimized for months and months leading right up to release, so I don’t want to promise anything like that but I’m sure we’ll be releasing that kind of stuff soon.

Leonid Melikhov: Obviously, we’ll make it look as good as possible. So it won’t take any framerate hits or whatever.

Joe Madureira: What are your demos running off of today?

Joe Madureira: Ok, is there anything that you would like to say to the fans about this game?

Leonid Melikhov: I would just stay to give it a chance, I know it looks different but it really feels like a Darksiders game, I hope you enjoy Strife and it’ll be out this year?

Joe Madureira: Do you have a date?

Leonid Melikhov: It’ll be toward the end of the year but we don’t have a date.

Joe Madureira: Awesome, thanks so much guys it was a pleasure and I’m looking forward to playing it myself.

For gameplay on Darksiders: Genesis, check out our coverage here.