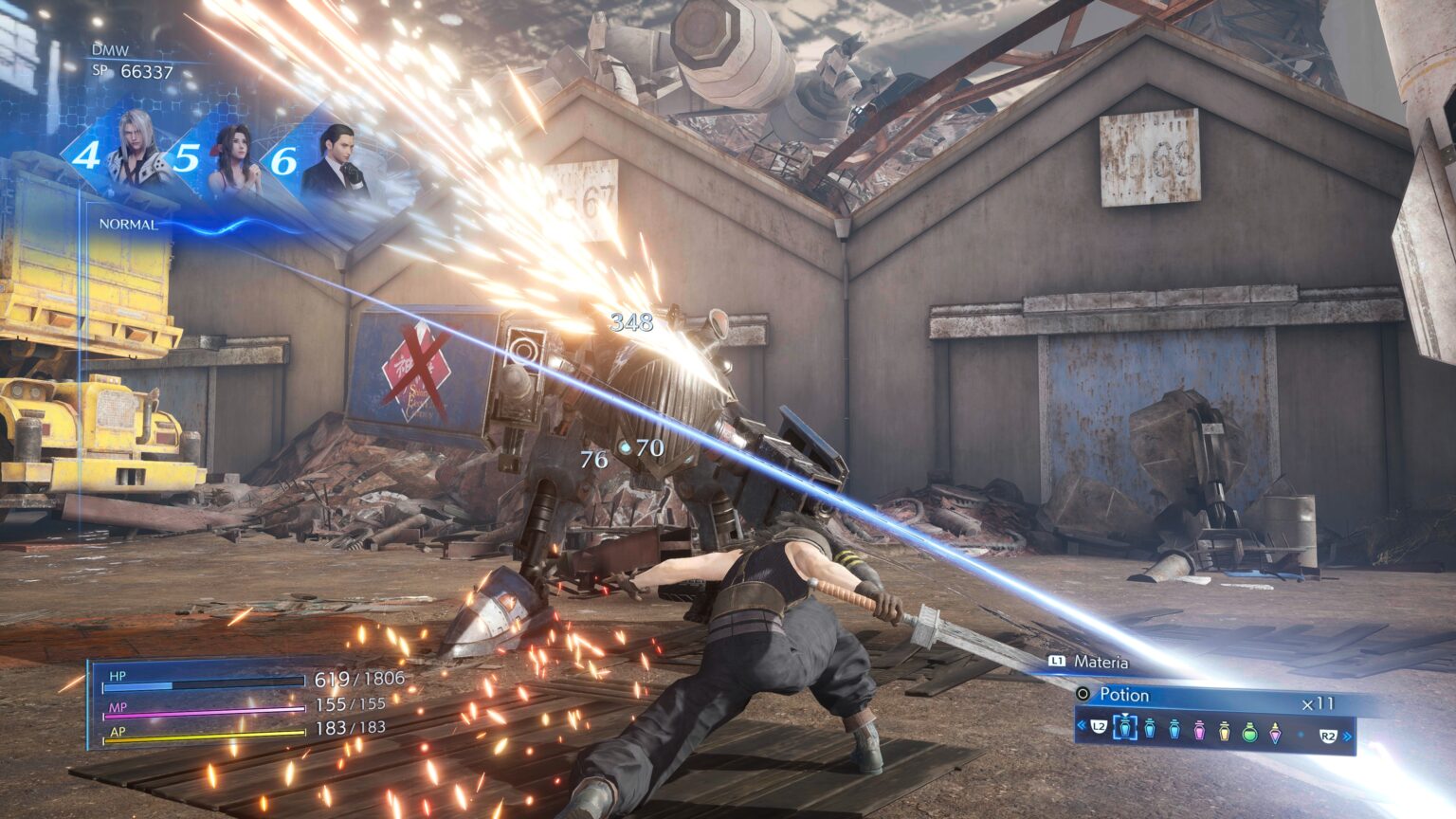 “This is more than a remaster, a game that crosses generations and platforms. We are very proud of all the amazing improvements that the dev team has been able to include in CRISIS CORE –FINAL FANTASY VII– REUNION.”

Resolutions and frame rates for each platforms can be seen below:

The performance can be changed as below on Steam.

Vertical Synchronization – On / Off.

Ambient Occlusion – On / Off.

1 What are the main differences between the PC and the console versions?

There are no differences in actual game content between the PC and console versions.

However, The PC version has additional detailed graphical settings, which allow the user to tailor the screen settings to their own PC hardware setup.

In addition, it also supports keyboard and mouse controls for PC users.

We have added in separate key configuration options for keyboard and mouse play, on top of the controller configuration settings, allowing all players to customize their preferred control method how they like.

2 Have there been any particular challenges regarding the PC port?

We used a game engine designed to support multiple platforms, so it was comparatively easy to get the game itself running.

However, PC version players will be playing on numerous different hardware environments, so it was quite hard work supporting all of those.

In particular, as there are so many possible displays with different screen resolutions and different types of keyboards, we needed to implement the game’s systems in a way that would work with all the various different combinations we could envisage.

In addition, the original game was developed for consumer console platforms and designed to be played using a controller, so we needed to adapt it to play comfortably with keyboard and mouse controls as well.

3 It’s a huge undertaking developing a game for all available platforms! So how did you do this?

We used the game engine to support multiple platforms.

4 The original PSP version was running in 480×272 pixels! How was it possible to update the art assets so that they look great on modern 4K screens?

We paid special attention to adding in a volume of extra information to the graphic data to realise the fine details that could not be depicted with the PSP’s screen and data size.

We referred to other titles in the FINAL FANTASY series while re-designing and updating all of the effects and UI from scratch.

The rendering flow is also completely different from how it was in the original, so alongside tuning the engine, the addition of new lighting and post-processing effects etc. also contributed to greatly improving the atmosphere created by the graphics.

In order to make the visuals as smooth and attractive as possible, we also carried out fine tuning on the processing burden on a scene-by-scene basis.

5 The PC version supports 120 frames per second. How much is this changing the feeling and quality of the gameplay?

By supporting 120 frames per second, it is possible to offer even more comfortable gameplay on a smooth screen.

The finish is such a high quality that we feel even PC players who play high end games a lot will feel at home with it.

6 Is the PC version using any dedicated copy protection system like Denuvo?

We are not using Denuvo but the game data is encrypted.

7 Which engine and middleware tools have been used during development and why?

The reason we chose Unreal is that it supports multiple platforms and is designed for high-end game development.

In addition, the original PSP version was developed in C++, so when we considered porting over the source code, the fact that Unreal Engine can use C++ was another factor affecting the decision

8 What is your favorite part / feature / element of the game regarding graphics and tech?

We aimed for something between a remake and a remaster with the development of this title.

As a result, we were able to make it a product that matches together what made the original great with tuning and updates suited to the modern era.

In terms of points we want to draw special attention to, one thing that even the development team was surprised by was that the new edition runs pretty much from the original game’s programming. Even though the assets have been updated and the presentation renovated, the number of “bones” in the character models remains pretty much the same as it was on the PSP. We did add in new bones for character’s fingers and where we updated the designs of their clothing in some places, but the main body structures, faces and hair are basically the same as in the PSP original.

Due to the development schedule and the volume of assets, it would not have been realistic to build everything again from scratch and make major adjustments to it, which is why we decided to handle it in this way, but when we first saw footage of the new version up and running, we realised that we were able to achieve even better textures than we imagined possible.

In terms of adding in new bones to the models, the technical settings were from the low-polygon era, with the animations set into them, but the fact that the finished visuals still hold up when viewed today really spoke of the technical skill of the original development team. We felt renewed determination that we had to develop this new version properly as the inheritors of that spirit.

You really can call this a game that crosses generations.

9 Music remastering: Was any new tech added here like surround sound, Dolby Atmos, 3D audio (PS5) which added to the process / development. How does this improve the quality of the experience for players?

For the remastering of the sound effects, we used surround sound in all aspects and strived to improve the immersion into the game through the sound, focusing on players who have high-end audio setups.

10 When talking about audio this is also the first time we have had the game with full English VO and using the same voice-over actors as Final Fantasy VII Remake. How exciting was it for the team to bring the characters to life in FF CC Reunion?

The original event scenes were great too, but with full voice overs, they now let you experience the emotions of the characters with even more immediacy.

It really moved us when the voice data was all in the bag and we looked over the finished event scenes.

The number of lines recorded for the main character Zack was obviously high, but Kunsel had a surprisingly large number too.

11 The cinematics were completely redone with Image Studio (former Visual Works) can you talk a bit about the tech that was used? Did they use any of the original game for these sequences or did everything have to be done from scratch?

Image Studio (Previously Visual Works) approach to this title was that we wanted to deliver the same impression from the cinematics that the original game did, because it was so well received back when it was released in 2007. To this end we used up-conversion (an image expansion method) that incorporates AI algorithms and unique image analysis techniques when making the movie scenes.

In addition, we also wanted to make new elements, such as the sword that the main character wields and the logos that appear in the story, look as if they had been there in the original all along, so we deliberately avoided using modern, realistic textures and instead incorporated a method that involved tracing the textures available at the time of the original development for each individual cut. Even though we put our efforts into this seamless incorporation concept, we were still delighted that many fans noticed all the changes as soon as the trailer was first broadcast.

As an exception, the cinematic summon animations that have a direct effect on gameplay are completely re-worked to enhance the pacing and tempo of play while keeping the feel and impact of the original versions.

15 years have passed since the announcement of the original Crisis Core: Final Fantasy VII, so we did not just stick to the external aspects like the character models and rigging, but considered absolutely everything, starting by looking straight into the player experience and making a fresh examination of all the characters.

The movie creation team then put together suitable stages, actions and visual effects based on the results of those analyses.

The Image Studio team sincerely hopes that players will enjoy all the cinematics in this title.