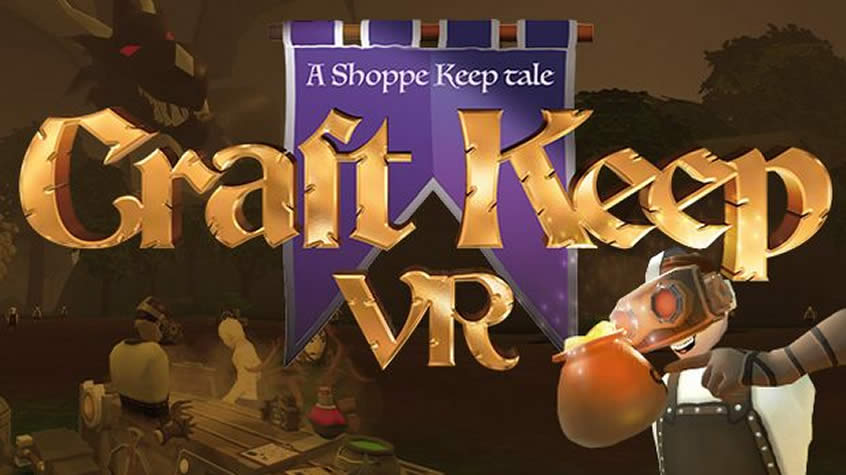 It was announced by Excalibur Games, that Craft Keep VR retail copies have now entered production, ready for a 26th May 2017 release. The hit fantasy VR game has evolved since its Early Access release, based on player feedback, with 86% of Steam user reviews being positive.

Check out the launch trailer of Craft Keep VR, featuring some gameplay footage:

“Mark Turpin, CEO of Yogscast had this to say:

“Best actual VR game I’ve ever played. So much fun, you need to get this! [Strangefire have] knocked it out of the park.”

With over 1,000 possible sword and axe types to craft, along with a number of potions, players are tasked with fulfilling a multitude of customer orders. A very picky clientele that are in no mood for patience results in the player having to run their store efficiently.

Craft Keep VR is one of the very few VR games available in a physical variant, making it a unique product for gamers.

Ordering individual items of stock, players craft their own potions, swords, daggers and more. And while stepping inside the fantasy world of Craft Keep VR is enthralling, players feel the pressure, needing to fulfil orders quickly enough to keep the customers satisfied.

Headed by Arvydas Žemaitis, this growing Lithuanian development house has enjoyed an amazing success with its first product. Arvydas is supported by his sound engineer Daniel Romeros and graphic artist Andrea Di Bartolo.

The team are currently working on bringing Shoppe Keep to Xbox One and PS4.

Founded in 2004, Excalibur Games has moved forward to release its own original products, in addition to widely recognised licensed titles.

European Ship Simulator, World Ship Simulator, Better Late Than DEAD and Counter Terrorism Unit have all been published digitally on Steam, and physically for retailers.

Excalibur has worldwide MicrosoftTM Xbox One and SonyTM Playstation 4 publisher status. The publishing house has recently announced Shoppe Keep and Circuit Breakers for Xbox One and PS4, and have already released Laser Disco Defenders for Sony’s flagship console.