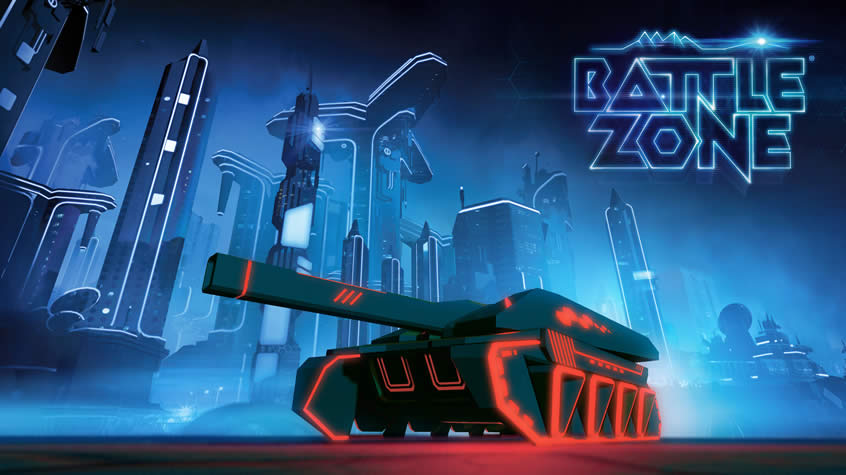 It was announced by Rebellion, that consistently one of PlayStation VR’s most lauded titles is Battlezone for thrilling co-op gaming to a new dimension: four-player virtual reality tank warfare across expansive cyber landscapes. What’s better than piloting the galaxy’s most powerful tank in VR? Piloting FOUR of the galaxy’s most powerful tanks in VR, with your friends!

Check out the “battlezone 101” video of Battlezone, showcasing the games’ features:

“Confirmed for the first time in a feature-packed seven minute gameplay trailer, BATTLEZONE’s procedurally generated campaign will be playable solo, or with 2-4 players online from launch.

The detailed “101” trailer also breaks down the game’s deep, rewarding gameplay loop; including hundreds of possible tank upgrades and loadouts, a challenging permadeath structure and deep decision-making between battles.

The Corporation: A glistening industrial complex dominating all that remains of the neon wastelands of Earth.

Humanity: Enslaved, exiled, and on the edge of extinction.

You: Mankind’s last hero. The planet’s only hope.

Strap yourself in to the cockpit and take control of the Cobra – the most powerful vehicle ever built – and experience the future of virtual reality in this explosive first person VR reboot of Atari’s seminal Battlezone, the first VR game ever made! Epic first person tank warfareCommand the most powerful vehicle in the galaxy and obliterate legions of mechanized forces across huge sci-fi environments in an effort to the save the neon-drenched wastelands of a far-future Earth.Built from the ground up for PlayStation® VR, Battlezone offers unrivalled battlefield awareness, a monumental sense of scale and breathless combat intensity.Limitless solo & co-op playExperience a thrilling campaign for 1-4 players where hostile environments, deadly enemies and intense mission types are blended together in a procedurally generated campaign map.

No two playthroughs will ever be the same!Choose your tank type, get your tactics right and customise your load-out before cutting down all in your path. Team up with friends or face the Corporation alone, the choice is yours…Devastating ArsenalLaser-guided missiles, machine guns, EMP bursts, shield boosts … and more! Load your Cobra with a wide range of devastating weapons and awesome special equipment, then outflank and outwit your enemy to cut through legions of ground and air defences as you blast your way to an epic final showdown.

Prepare for the battle ahead. Find supply points to purchase explosive new weapons, and customise your load-out to best suit your mission.Cutting-edge upgradesWith each playthrough, you can also unlock more powerful tanks, explosive weapons, special equipment and modulators to help you complete your mission.As your enemy gets stronger, so will you! Collect data on the battlefield and use it to upgrade your shields, active reload speed, and your healing abilities. Never face the AI core out-gunned!For more on BATTLEZONE’s influences, design, audio and more,  head to the official PlayStation Blog for a full week of new content.BATTLEZONE launches on PlayStation VR October 13th as a digital download and boxed edition. Pre-orders are now live at  Battlezone.com

Founded in 1992, Rebellion® is one of Europe’s leading independent game developers and publishers. Whether it’s the breathtaking intensity of Sniper Elite 4, the face-hugging terror of Aliens vs. Predator or the grindhouse frenzy of Zombie Army Trilogy, the Oxford-based studio is known for creating stand-out games that thrill players.”

For more information on Batlezone, visit its official website.