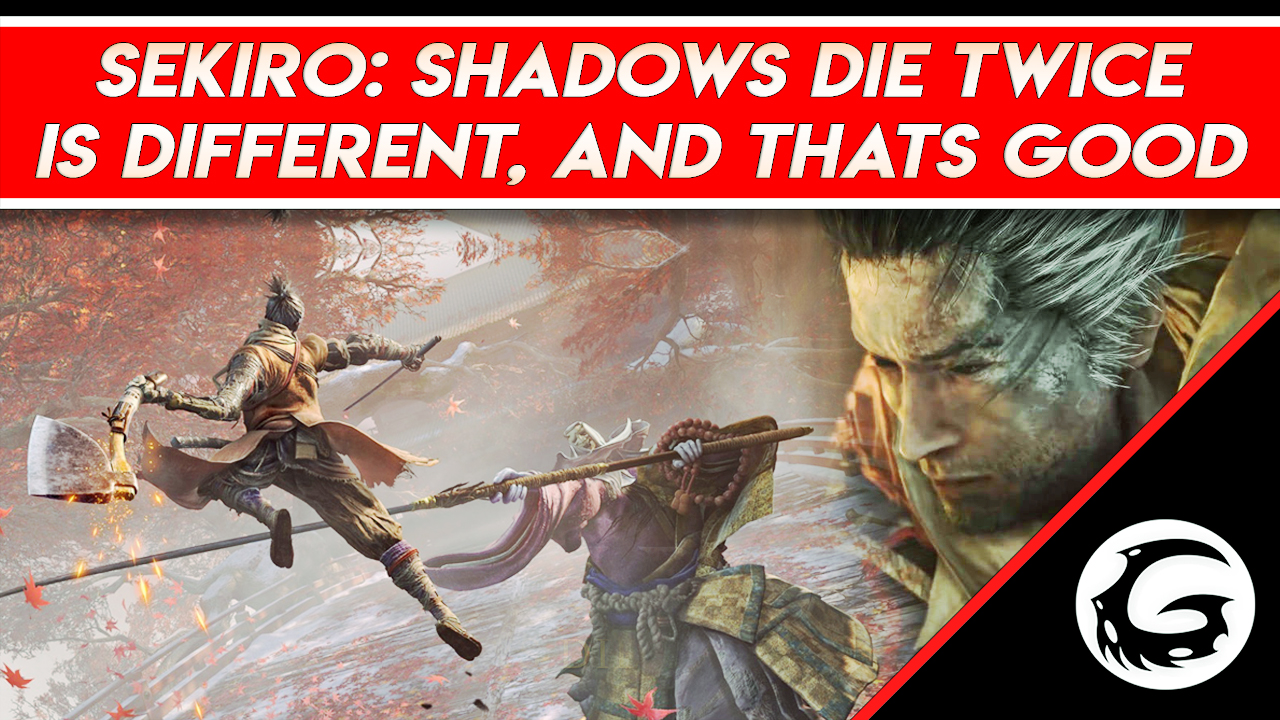 Sekiro: Shadows Die Twice Is Going to Be Different

Sekiro: Shadows Die Twice is the newest IP from FromSoftware, and it looks like it’s shaping up to really change the mechanics we know and love. For some From veterans, this is terrible news. For me, however, Sekiro looks to be taking many things we’ve come to take for granted in FromSoft games and transforming it into something new. Something exciting. Today, we’re going to be taking a look at how Sekiro departs from the classic FromSoft dynamic, and why that’s actually good.

Primarily, Sekiro will depart from the Soulsborne tradition by removing character customization. Instead, players will be stuck with Sekiro, our protagonist. While at first he may appear to be a standard samurai archetype, there’s something to be said for replacing a whole arm with a feudal-style Adam-Jensen-esque prosthetic. Sekiro will be able to use this arm to do all sorts of things, including unlockable skills and upgrades that will grant him several abilities. These include an ax to break enemy shields, a flamethrower to set enemies (and even your own blade) alight, and a grappling hook that is useful for both dashing to enemies and exploring a new world.

Without multiplayer, Sekiro is going to have a much greater focus on you, the only player, and your journey throughout this new and exciting world space. The choices you make will revolve around what kind of warrior you want to be. And the journey you take will no doubt be filled with FromSoft’s classic, mystical narrative.

A New Perspective from FromSoft

The world’s exploration is something that deserves special mention. Access to a ‘grapple’ tool means that the main character’s mode of traversal is suddenly much more vertical. The player is no longer anchored to the ground, like in Dark Souls. Instead, you are free to dash onto cliffs, trees, and buildings to gain new vantages, explore new areas, and eventually swoop down on hopelessly unaware enemies. A sense of verticality has often been present in Soulsborne games, but only really felt when moving to different areas in the interconnected world-spaces. In Sekiro, the world is just as connected, but the paths between areas suddenly have no need for ladders or ramps. When the player is presented with freedom to climb and grapple at will, it creates a whole new dimension to gameplay.

This not only changes map movement and exploration, but also combat. When Sekiro can attack from any angle, enemies need to be able to respond. Enemies are just as tough as we remember in other FromSoft titles. Combat is just as fast as Bloodborne, but seems to draw on a different kind of finesse. Previously, stamina and poise were of key importance in fights, with dashes and counters used to create space when fighting tougher opponents. Now, you’ll have to keep track of ‘posture’, a measure of how foot-sure Sekiro is vs. his opponents. And just like in Soulsborne games, any regular enemy will be keen to remind you that one misplaced step is going to swiftly see you dead.

Embrace the Dance of Death

Combat is fluid and gratifying, with a serenity and grace that distances Sekiro from particularly Dark Souls. Weapons can miss by a hair’s breadth, and timing is just as (if not more) important when balancing aggressive and defensive play. Countering an attack works similarly to From’s previous titles; enemies will be staggered and temporarily open to damage. However, enemies have a poise meter just like you, and you’ll need to work around that to ensure that you don’t get caught out with a similar counter or interrupting attack. This system encourages aggression, but not in the same way as Bloodborne. While Bloodborne’s system resulted in a back-and-forth trade of health, stamina, and speed, Sekiro asks the player to take part in a dance to stay on your feet and keep swinging.

Expect just as much speed as the hunters of Bloodborne, but Sekiro really amps up the responsive nature of combat and adds extra emphasis to FromSoft’s requirement that you read enemies movements and prompts. There has been some controversy over a small red indicator that signifies an incoming enemy attack that cannot be dodged. While some argue that this reduces the skill-floor by telling players to dodge, the window is short. In actuality, the indicator presents the player with a set of choices depending on what they have equipped. Do you know the Shinobi skill that allows you to dash into enemy thrust attacks and stomp their weapon into the ground? Do that. Would you like to gain height in order to use your ax prosthetic? Jump. Need to gain some distance to make use of your amped-up shuriken? Dash horizontally away. And all of that thought process needs to happen during a flash of red danger.

These moments represent choices for the player that encourage the dance and flow of combat. Yes, the indicator makes the timing window more obvious – but, there’s a strong argument that, in the chaotic flow of Sekiro’s combat, the indicator is a necessary evil. It allows the player to respond appropriately, and ultimately feel like a real ninja. That’s what we all want, isn’t it? 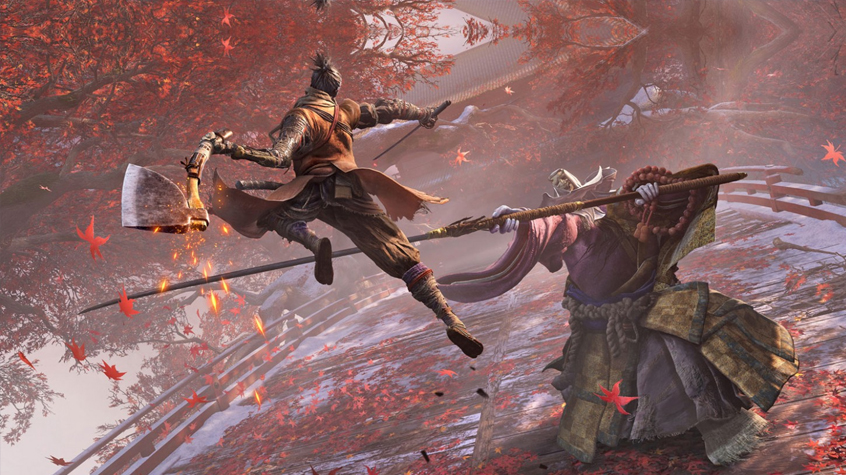 The skills and abilities in Sekiro are gradually unlocked by spending points in a skill tree. It’s never as simple as that in a FromSoftware game, however. Players will need to find and learn these skills in the game world, almost like picking up techniques from their old masters. Upon returning to the main hub of the game, you will then be able to arm yourself (literally) with the appropriate skills for the task ahead. We definitely haven’t seen all the skills available yet, but there’s already tons. While the days of creating specific ‘builds’ may be gone in this particular From title, players will still need to carefully pick and choose their progression throughout the game. The system will be immediately familiar to any RPG player; a classic skill-tree with different paths for focusing on different aspects of combat (more on that in our combat guide, coming soon).

I know that I am going to miss both the ‘fashion’ aspects of Soulsborne games as well as enjoying creating my own builds. But I also know that I am going to love being dedicated instead to learning Sekiro’s mechanics and exploring the potential of each new ability. The new system seems to be akin to equipping a new trick-weapon in Bloodborne; every time you change things around. Sekiro himself might not change, but the FromSoftware trademark of getting something new and exciting and then mastering it in combat is still fundamental to the gameplay. I don’t think we’ll miss builds and fashion too much in the context of Sekiro; it simply has more focus on the single character and, actually, that’s okay. 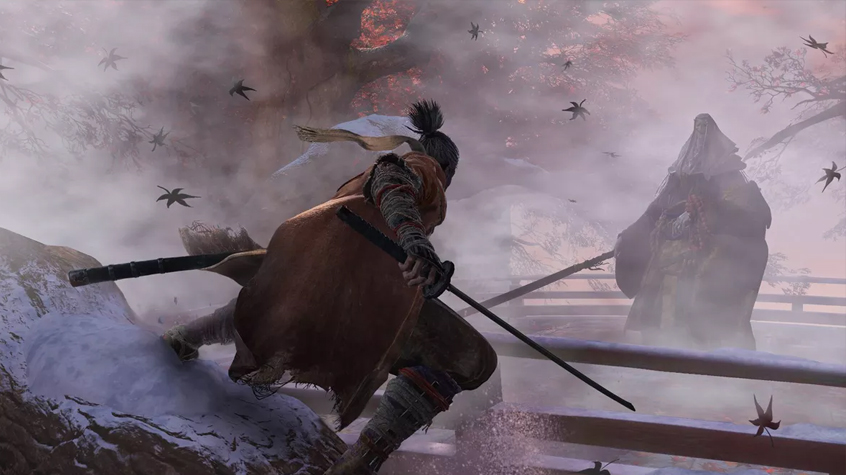 Old Friends in a New World

Skills and upgrades will be customizable in the hub section of the game, where NPC’s and vendors will be located. This will be immediately familiar to Soulsborne veterans, with some cheeky new changes. Firstly, a ‘trainer’ NPC will give players a chance to test their skills against an undying ally before heading out into the real world. This would seem odd in, say, Dark Souls, where equipping something new might only change your attack pattern slightly. But in Sekiro, unlocking a new counter-attack or prosthetic attachment could significantly change how you want to equip and use the rest of your abilities. In that context, and with the ability to change an awful lot about your fighting style, I think that the trainer is going to be really handy when making tough decisions before heading out into the world.

Other NPCs will allow you to do the classic things we’ve come to expect, such as upgrading your ‘Gourd’ (think estus flask!) Not everything about the zone has been revealed yet, however, and there are certainly a lot of unanswered questions about who the characters are and how they are connected to Sekiro and the wider world. Much like any From game, I’m certain there is going to be a whole lot of lore hiding just beneath the surface.

I think that’s just it, actually. A lot of Sekiro lies just beneath the surface. Casual players will be able to move through the game without too much concern for getting bogged down in builds and stats. Meanwhile, the classic Soulsborne nutcases (myself included) will be able to dive in and really get their teeth stuck into both the combat and the narrative of Sekiro. Both aspects promise to be familiar, yet strikingly different in their approach to a FromSoft game. It certainly won’t play like Dark Souls or Bloodborne, and I’m actually really happy about that. Sekiro promises to forge its own path, and I’m sure players will come to love it in the same way that we were worried, then intrigued, and finally fell in love with Bloodborne. I know for sure that I am really excited about a whole new kind of FromSoft adventure.

Only time will tell, but keep your eyes and ears fixed to this spot for more regular Sekiro coverage. We’ll soon be taking a more in-depth look at combat, progression, and the story. So, stay posted by Subscribing to the channel.

Let me know what you’re most excited or disappointed about for Sekiro in the comments section below, and I’ll see you all soon for more guides and gaming news.